Animal Crossing New Horizons - Where to Get Sanrio Amiibo Cards 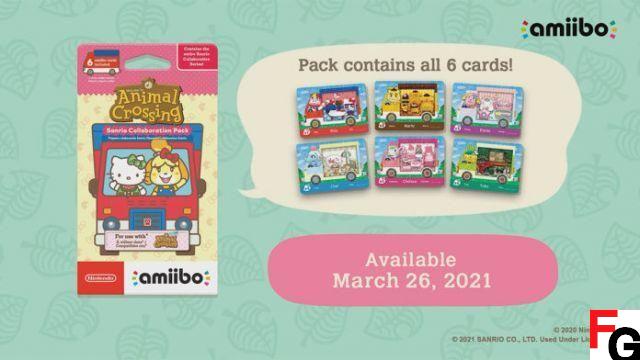 Animal Crossing: New Horizons just celebrated its first anniversary, with the game itself truly being the perfect game for the type of year we've been through. As with previous Animal Crossing games, there have been a number of updates throughout the last year, but the latest is quite different. This time it's a crossover with the Sanrio brand and its characters, which are best known for their most popular character Hello Kitty. Rather than just being added to the game like other updates, you'll need to purchase a set of special Sanrio Collaboration Pack amiibo cards to scan into Animal Crossing: New Horizons. These will likely be quite hard to find as they're only available from one retailer in the US, so we've created a guide with details to help you get them when they release this week.

Where to Get Sanrio Amiibo Cards

Sanrio amiibo cards for Animal Crossing: New Horizons will launch this Friday, March 21. the same six in each pack. This is good for limiting the number of people buying, although it certainly won't stop scalpers.

Unlike previous Animal Crossing amiibo cards that you could find at multiple retailers, Sanrio amiibo cards are instead exclusive to Target. You might think it shouldn't be too bad and you'll just grab a package online to have it shipped to you or go to the store and find them on the shelf on a Friday, but it's not.

Target revealed via its weekly ad that Sanrio amiibo cards will be available exclusively with online pickup or Drive Up. Specifically, they said they would be in for the online pickup or car ride at 8 a.m. PT, either 9 a.m. ET or 6 a.m. PT. That means you'll have to go to the website when they come up and place the order for in-store pickup, then you can either go inside the pickup area and get it, or pick it up in your car also outside the store. While you can order it online for in-store pickup, you won't be able to order it online to ship to your home for some reason. They're also not supposed to have stock on the shelves, though I guess we'll see if that really happens based on stock numbers.

This is similar to what we've seen with how Target has handled the PlayStation 5 and Xbox Series X/S, so they should be anticipating that they'll be hugely popular when they release this week. Hopefully, the fact that each pack has the same cards will keep non-scalpers from buying a bunch of them. Target says there's a limit of two, so we'll see on Friday how easy or hard it will be to get the Animal Crossing: New Horizons Sanrio amiibo cards.