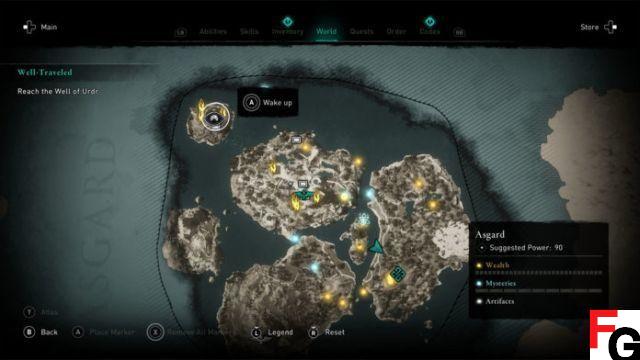 Assassin's Creed Valhalla is set in the Viking Age, which of course had to incorporate Norse mythology. One such method is through Asgard, which you can visit as another character separate from Eivor. Trying to leave Asgard can be a bit confusing and this guide will tell you how you can do it.

How to leave Asgard

Asgard has its own quests to complete, but you may want to return to Eivor to continue the game's overall story after a while. This is something that can seem confusing on how to do it if you don't really know how to do it.

In most Assassin's Creed Valhalla, the key to returning to places you've previously visited is via the world map which you can access at any time. Whether you're trying to fast travel somewhere in England or trying to get back to Norway via the Atlas, it's all done the same way.

Asgard changes things up though, having a specific way of leaving that you might not notice at first. To do this, you just need to move up the map as with the other travel methods. Rather than being able to bring up a map of England and choose a location to fast travel to, you instead need to move to the upper left area of ​​the map.

You'll see a small island in the top left of the map with an icon that looks like an eye. Hover over this icon with your cursor and you'll see that you can interact with it by holding A/X for "Wake Up". This is exactly what you want to do, as it will wake up Eivor who took the potion from Valka's hut and bring you back to that very place.

add a comment of Assassin's Creed Valhalla - How to leave Asgard