Assassin's Creed Valhalla - Who is the traitor of Grantebridge? 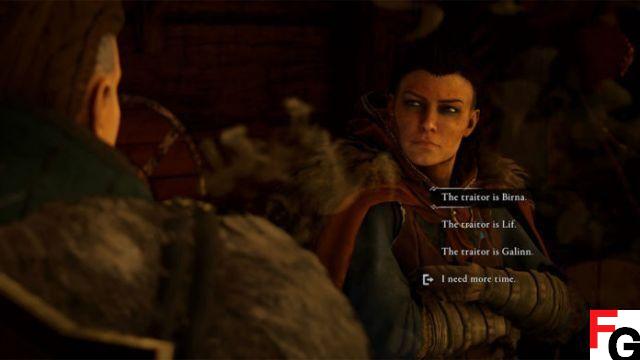 Assassin's Creed Valhalla puts you in control of the Viking raider Eivor, who attempts to create a new home in England with their group, while gaining allies from those already settled in the region. Most of this involves you going to fight with others to gain control and help the kings gain control of certain areas. One of them, however, requires Eivor to essentially become Sherlock Holmes to figure out who the traitor is in the Grantebridge area as you work with its leader Soma.

Who is the traitor in Grantebridge?

Each area of ​​Assassin's Creed Valhalla, once you have traveled to England, prompts you to engage in that region to try and expand your reach. One of the first here takes you to Grantebridge, which is run by Soma. However, there is a traitor in the middle that you must uncover for her, with you having to make the final decision.

Throughout this mission, you will eventually collect clues about each of the three possible suspects, namely Birna, Galinn and Lif. This includes not only talking to them, but also talking to others about the incident to see if there was anything that might link it to any of them.

Once you've finished doing all of that, you can talk with Soma and present the clues for each of them and come to a final verdict. Whoever you choose will be executed by Soma, so you must choose wisely.

Although you can talk to everyone and have the clues in front of you, it can still be very difficult to decipher. Each of the three suspects has reason to believe they might have been a traitor, but there is only one true right answer. That person is Galinn, whose obsession with fate and the like seemed to end up betraying him to Soma and company in the end. Picking it will cause her to slit her throat, she even says it's like cutting off her arm to do so. Making the wrong choice here doesn't really have a huge impact on the overall story of the game, but it will make Soma less friendly to you and Birna won't join your raid team.

Audio Video Assassin's Creed Valhalla - Who is the traitor of Grantebridge?
Astroneer - How to Get Tungsten ❯

add a comment of Assassin's Creed Valhalla - Who is the traitor of Grantebridge?