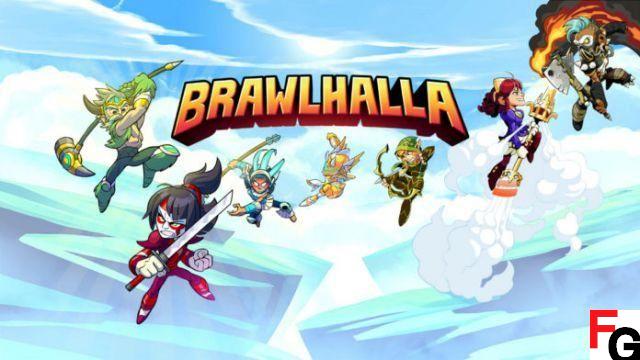 10.25 update arrived for Brawlhalla, and here is the full list of changes and fixes added with this patch.

The new Ranked Season 20 has just gone live in Brawlhalla, bringing a lot of new things to the game, including a brand new rotating queue that has a different game mode for each Ranked Season. Starting with this one, 2v2 Kung Foot is the highlight of this season.

The European Doubles and Singles are also coming up, in the Spring 2022 Championship, so be sure to stay up to date with Brawlhalla on all their social media so you don't miss it.

If you're new to Seasons, here's some information you should know. You're going to get a soft reset from Elo and also receive Glory, the currency you receive for playing Ranked. You can use it in the Ranked section of Malhalla to get special colors, weapon skins, emotes, nameplates, and the new companions. We hope you enjoy your rewards and enjoy the new season!

Soft Elo Reset is based on your current Elo at the end of the season.

Glory earned is based on a combination of your highest max rating (highest 1v1, 2v2, team or legend/Elo rating) and total wins. This was designed to reward both the skill and dedication of those pursuing Glory.

Note: There is a minimum of 10 games played to be eligible for Glory based on your rank. For help estimating your Glory Gained or New Elo after the reset, go to: https://www.brawlhalla.com/glory-calculator/

If you are ranked Gold or better in your highest rating, you receive a ranked border that people will see in the match preview screen. There are ranked borders for Gold, Platinum and Diamond levels. These will last for one season and will be updated again after the new season ends.

Your frontier from any previous season does not carry over and has no impact on your current frontier reward.

Ranked avatars include prestigious versions for those who ranked high in previous seasons. For example, if you ranked Platinum last season and Gold this season, you will receive the upgraded versions of the Competitor Badge and Gold Emblem. You will still have your original Platinum Emblem avatar from previous seasons.


You must play at least 10 games to receive ranked avatars/frontiers at ANY rank.

Information on upgrading ranked avatars to 5th and 6th levels

For players who have reached the 5th level of an avatar by reaching a certain rank or higher for a total of five seasons: the 5th level of this avatar will remain permanently in your inventory! Congratulations on your accomplishments!

Avatar Tier 6, for those who have reached a certain rank or higher for a total of six seasons, will take on a whole new look! These avatars will become increasingly prestigious with each subsequent seasonal repeat until level 10, at which point the level 10 avatar will remain permanently in your inventory.

In short, every 5 levels of avatars, you will permanently keep the most impressive and complete version, then you will start working on a new version for the following levels for levels 6-10, 11-15, etc. .

Beyond glory, there is immortality! In Mallhalla, under the “Ranked” tab, players can spend their hard-earned glory to purchase Skyforged colors, weapons, nameplates, emotes, and companions. Skyforged colors can only be used on legends that have reached level 5 or higher.


Players can also purchase Goldforged colors, weapons, nameplates, emotes, and companions with Glory. Goldforged requires that the Skyforged version of this item has already been purchased. Show off your might with these exclusive ranked items, including the first-ever ranked companion, the Two-Tailed Ox!

The sixth year of Brawlhalla Esports continues with the 2022 Spring Championship! This weekend, our European region will fight in singles and doubles.

Don't miss any action, tune in to watch it at twitch.tv/brawlhalla!

By logging into the Brawlhalla Twitch stream, players can earn exclusive Esports viewing rewards. Viewing rewards for this Spring Championship include:

Brawl of the Week – Team Strikeout!

You and your teammate choose your top three legends and take on an enemy team. 3 actions for each player; cycle through your legend list as you lose shares. KO all enemy team legends to win!

Brawlhalla is available on PlayStation, Xbox, Nintendo Switch, PC and mobile devices. To know more about the game, be sure to check out official site.