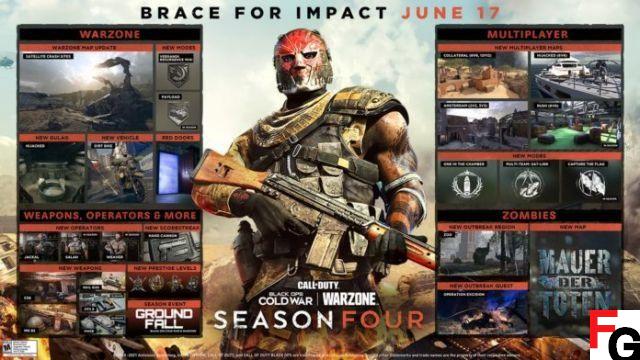 Update 1.38 is almost here for Call of Duty: Warzone, and here is the full list of changes and fixes added with this patch. This is the update for Season 4, bringing several new weapons, operators and more to the game. Treyarch has already announced the patch notes for the latest Black Ops Cold War update, and this update contains a preview of some of the new weapons and operators coming to Warzone. Much like Season 3's Hunt for Adler event, Warzone Season 4 will feature a limited-time event called Ground Fall during the first week of the season, so there will be plenty to see and do for you. players when the patch goes live. Here's everything you need to know about Call of Duty: Warzone update 1.38.

There are currently no patch notes for Call of Duty: Warzone update 1.38. This article will be updated once Raven Software releases patch notes for the Season 4 update. However, we already know most of the major features coming in the next patch, so here is a preview of what to expect in Warzone Season 4.

When is the new Warzone update?

Call of Duty: Warzone Season 4 will begin at 21 h 00 PT on 16 June. The new update will be released 24 hours before the start of the new season at 21 h 00 PT on 15 June, so Warzone players will have plenty of time to download and install the new patch before the season begins. File size and other details have yet to be released, but this update is expected to be quite large.

Call of Duty: War Zone is available now on PC, PS4 and Xbox One. For more information about this update, visit the official Raven Software website.