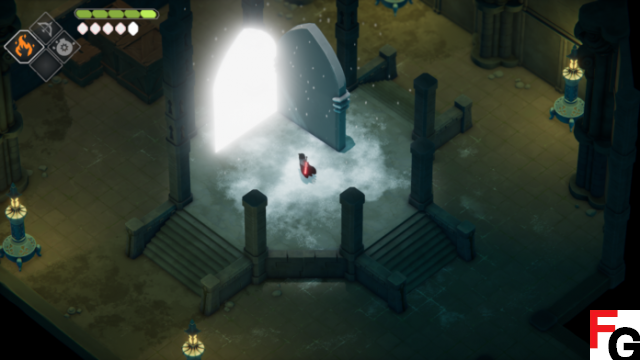 The last real dungeon in Death's Gate is Castle Lockstone, a massive fortress at the top of the stairs from the Stranded Sailor docks. This sprawling non-linear fortress is full of challenging battles and puzzling puzzles. There are pitfalls to avoid and keys to find. If you're lost and need a hand getting all four free souls and finally unlocking that Hookshot spell, check out the full Castle Lockstone walkthrough below.

The hook shot spell is one of the best in the game, allowing you to traverse gaps and access areas that previously seemed impossible. If you've seen anchors lying around in the environment, then you know there's a use for the Hookshot. The grappling hook is the final spell, so you'll be able to access almost all of the final secrets once you get it - and that means there are plenty of soul energy orbs you can get to upgrade yourself. . I recommend backtracking all areas and going treasure hunting once you get the grappling hook. The final weapon, the Greatsword, is also available to catch once you have a grappling hook. He doesn't even use magic!


To reach Castle Lockstone, go to the Stranded Sailor area – behind the ship, at the top of the stairs, there is a cracked wall. Blow it up with the bomb spell to access it.

In the first room you will find a Reaper HQ portal. Hit the four pink stones and pull the lever to unlock the door.

Inside Lockstone Castle, follow the path from the main hall to the old portal room. There is a[[seed of life]behind the ancient portal, simply smash the crates to reveal it. Then we will have to hunt down four free souls.

Starting in the main hall with Barb the Bard, go through the door in the upper left and go up to the upper levels of the castle. In the upper left corner of the room, you will find a door leading to a room with a balcony just above the ancient portal. Defeat all enemies to get your first free soul.

From the main hall, go through the north door into a room with high platforms and anchors. Ignore the anchors for now! At the top, you'll find another pink switch puzzle. This time pink lasers will appear - you can't dodge them, which makes the lasers hard to deal with. Avoid the lasers and hit all four to get the [[Key].

Return to the room that leads to the first free soul. On the lower level, there is a locked door. Use the key to open it and enter the battle challenge. There's a new Spearman enemy who's quick on his heels. Follow up with dash attacks to deal with him. After the fight, you can claim the second free soul.

Back in the room where we accessed the first two free souls, take the mid-level path above the front door to reach a high balcony with a switch that unlocks the door to the main hall.

Go through this door and dodge the pink lasers! Remember that you cannot browse them. You have to wait for them to clear or use walls to block them. In the next room, you'll need to press all four pink switches while hiding behind walls to avoid the tracking beam.

The third beam puzzle is the same - but the beams won't follow you. Simply wait for the tiles to reappear and take your time to press the four switches. The battle challenge awaits, so use the green pot if you need to heal up.

Complete the third battle challenge and you'll gain access to the third free soul. One more to do!

We can do more in the castle, but ignore that for now. Return to the main hall and go through the door in the lower left. Ignore the switches and ascending/descending platforms and enter the large tile room. You must press the four pink switches while avoiding the rotating lasers.

In the Battle Room, you can use the respawning Ice Crystals to safely defeat long-range spearmen if you're having trouble or your health is very low. The last Free Soul is at the top of the ladder.

Open the Ancient Portal and you'll have four more waves of enemies to defeat in the Avarice Challenge. The new Fire Wizard generates a direct wave of fire, but it's easy to deal with. Just attack him from the side, stun him and finish him off.

The Spearman returns in the third wave. Take care of him safely using the enemies of the Green Magic Vase – run around, spill the Green Magic on the caster to defeat him without even coming into melee range.

This could be your first encounter against a giant knight. These big boys are a lot faster than they look. To safely defeat them, trick them into performing forward slam attacks by standing in front of them at medium range…just outside of their forward slam attack range. If you can do that, you can constantly attack, baiting him into performing that attack over and over while you dodge.

As a reward for your victory, you will get the Hookshot! There's a lot more to do in the castle, so let's come back with our spell reward. On the way back to Castle Lockstone, don't miss the[[Mass of soul energy]behind the logbook.

Back at Castle Lockstone, we now have to light up four urns with flame spell. Most of them can only be achieved with the Hookshot.

Signed contract: The hidden signed contract collectible is found after dropping down from the third urn slot. Go through the door partially blocked by wooden doors.

Lighting all four urns reveals an elevator in the main hall of Lockstone Castle. On the rooftop, follow the path to the Free Crows Camp and you will head to the old watchtowers. This is where the final Great Soul awaits you.