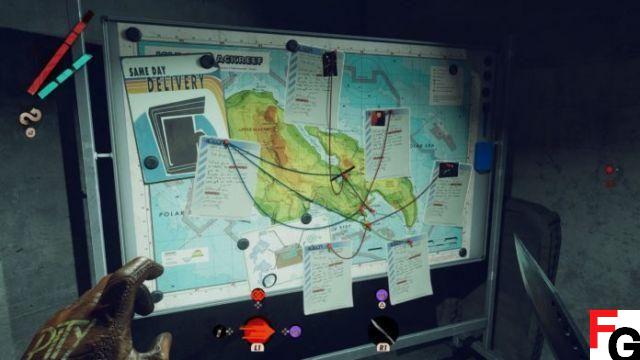 A game of spies is playing out in Death's Loop, and you may never realize it. If you hack into a radio in the morning and listen carefully, you can hear a series of cryptic numbers and letters. What does all this mean? You will have to discover the secret spy bunker in Rocher de Fristad to even start on this complicated secret. Even if you didn't hear the strange transmission, you might have found locked doors in three different places with no idea how to open them. If you're tired of being stuck outdoors, here's how you can play the big game and master a little spying.

This easter egg quest isn't just an awesome puzzle, it can give you huge rewards – the spy bunker has a complicated locking mechanism. Once you have obtained all three codes, you can unlock the Spy Archive which is full of hidden information. The information inside further explains the game's plot, what's going on with Colt, and many codes you can use to open doors or disable security. These spies have done their digging so you don't have to. Reap the benefits by solving one of the toughest puzzles in the game. Or any game, really.

Get the three letter and number codes by hacking any radio in the morning. Enable subtitles to see what code is much easier. There are three sets of numbers — a Letter-Number combo and a number. The Letter-Number combination designates a location on the map. These locations are always the same and do not change. These are secret locations for spy rooms.

There is always a number after the Letter-Number location code. This number DO NOT CHANGE each cycle. It's random for your game, but it will always be the same for each cycle. This code indicates how many times you must press the buzzer to open the door. Write down these codes!

NOTE: Be sure to press the button QUICKLY. Don't wait between presses. Quickly press the doorbell and it will open. You can't fail, so try again if it doesn't work.

Check the radio in the morning, get the number (doorbell code) following each location code, go to each location before the end of the day to get all three pieces of the Fristad Rock bunker lock.

You find the numbers-letters-numbers codes DO NOT CHANGE after each loop. These codes stay the same, so you can get them in any order or on any loop. When you have all three, return to the Fristad Rock bunker and enter them.