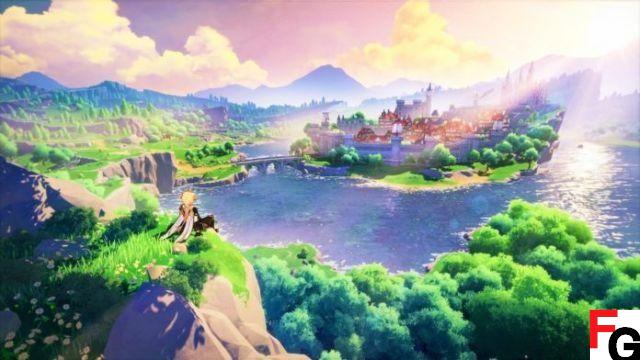 Update 2.0 for Genshin Impact is shaping up to be the biggest update the game has received to date, adding an all-new region, all-new characters, and several exciting new features. The Genshin Impact story continues in this update as well, and there are plenty of new story quests players can take on in the new region. However, since Genshin Impact's development is based in China, the update may come out at an odd time if you're anywhere else in the world. Here is when you can start playing Genshin Impact version 2.0.

Genshin Impact version 2.0 will be released at 20 p.m. PT / 23 p.m. ET Tuesday, July 20. Mihoyo did not provide an exact release time for the update, but the developer announced that the maintenance will start at 15pm PT / 18pm PT and will last around 5 hours. This means servers should return at 20:00 PM PT / 23:00 PM PT, but server maintenance could still end earlier than that.

Either way, Mihoyo compensates players with 300 Primogems for downtime, which is a nice bonus. The update might also roll out to different platforms at different times. PC gamers could get the update before console gamers, or PlayStation gamers could be the first to be able to download it. There's no way to know for sure, but the update will likely be released around the same time on all platforms.

On PC and PlayStation 4, the 2.0 update weighs around Go 6,5. On mobile devices, you just need to download Go 1,83. However, you will need additional free space to install the update. PC drives need 16 GB of free space on their drives, and mobile drives need 3,5 GB of free storage.


Who is the first character in Banner 2.0?

The Heron's Court wish event will begin as soon as the servers restart after downtime. You will have the chance to obtain the new five-star character Kamisato Ayaka, who specializes in Cryo abilities. The banner also features the four-star characters Chongyun, Ningguang, and Yanfei. The event will run until August 10, so you have just under a month to save up your Primogems.

Mihoyo has already released patch notes on their website ahead of the update's launch, and you can read them below. Be warned, it's a long list of changes and updates.

New Areas: In Version 2.0, three areas, Narukami Island, Kannazuka, and Yashiori Island in the Inazuma region will be available.

Additionally, Expeditions, Daily Commissions, and other new content will also be added in Inazuma.

Inazuma Shogunate, Yashiro Commission, Kamisato Clan. Widely known as one of the most distinguished clans in all of Inazuma, it is the branch of the Tri-Commission that handles ceremonial and cultural affairs.

Since the death of my parents, Brother and I have assumed responsibility for all clan affairs, large and small.

Fireworks were born out of people's desire for light and beauty. The first mention of fireworks dates back to Liyue during the Archon War. Born from fire and embodied in stone and metal, they have since become an integral part of many festive activities in Teyvat. The Naganohara family has perpetuated this beautiful human tradition from generation to generation. It is said that in addition to locally made fireworks, fireworks made by Naganohara Fireworks were also used during the Liyue Lantern Rite, adding an extra touch of splendor to the festival.

Use 1 Thunder Pellets and 000 Thunder Crystals at Ocean Lord's Oath to exchange for Beidou "Uncrowned Lord of Ocean" (Electro). Can only be redeemed once.

2022/08/16 03:59:00 After the event shop closes, any Thunder Pellets or Thunder Crystals in your possession will disappear, so be sure to redeem them for rewards in time!

During the event, complete the "Voyage Prep" quest to unlock Act I: Bolt Blitz.

During the event, travelers can complete six challenges in total, with three new challenges unlocking each day.

After starting the challenge, travelers must use Thunder Spheres to move quickly and reach the destination within the time limit.

During the event, complete the “Chasing Thunder” quest to unlock Act II: Lightning Round.

After starting the challenge, travelers will need to defeat all opponents within the time limit.

During the event, complete the "Through the Storm Clouds" quest to unlock Act III: Weaving Lightning.

After starting the challenge, travelers will need to defeat all opponents within the time limit.

Beidou's Crux fleet has almost completed its supply and preparation work in Liyue. As promised, the fleet is ready to take you through the storms to Inazuma.

The Traveler never stops for long. Now is the right time to embrace fate and set sail for the land engulfed by tempest and storm… The nation of “eternity”!

After the version 2.0 update, the unlock criteria for some quests will be adjusted as follows:

* Of which, monster level in Archon Quest Chapter I: Act II will be adjusted to Lv. 30 (originally Lv. 35). The rest of the adjustments made are adjustments to the player's Adventure Rank for quest unlock criteria, while other unlock criteria and quest rewards remain unchanged.

Hypostase Pyro : Elemental creatures that shield themselves from incoming attacks with their durable carapace.

Fatui – Mirror Maiden: A Fatui mage of Snezhnaya who can command a Hydro Mirror in battle.

New Achievements such as "Mortal Works: Series II", "Challenger: Series IV", "Meetings in Outrealm: Series II", "A Realm Beyond: Series III", "Inazuma: The Islands of Thunder and Eternity – Series I" and additions to the category "Wonders of the world"

Updated the range of monsters on floors 9-12 of Spiral Abyss.

Ley Line Disorder for Stage 9 has been changed to:

Ley Line Disorder for Stage 10 has been changed to:

11th Floor Ley Line Disorders have been replaced with:

12th Floor Ley Line Disorders have been replaced with:

From the first moon phase refresh after updating to 2.0, the three moon phases will be as follows：

When an active character's elemental energy is fully charged, the DEF of opponents hit by the character's normal, charged, or dipping attacks will be reduced by 7% for 10 seconds. 5 stacks max. Each stack has an independent duration.

When an active character obtains an elemental orb or elemental particle, the character will unleash a shockwave that deals DMG to surrounding opponents. This type of shockwave can be triggered once every 4 seconds.

After triggering an elemental burst, the ATK of each character in the party will be increased by 20% for 10s. Maximum 3 stacks. Each stack has an independent duration.

Added voice lines that will trigger when a character is at low HP.

Adds Japanese voice over for some characters.

There are two methods for linking:

Optimized the UI display on mobile devices when entering aiming mode when using touchscreen controls: the "Drop Challenge" button is hidden and the text transparency of the challenge objectives is reduced.

Optimized the expressions of certain characters in battle.

Adjusted the description of Ningguang's passive talent "Trove of Marvelous Treasures": Shows the location of nearby ore veins used to forge on the minimap.