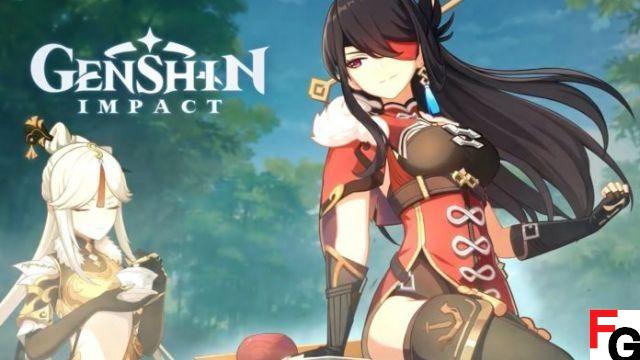 The Hangout series for Genshin Impact was recently updated with two new events, one featured for upcoming archer Geo: Gorou and another featuring legendary sea pirate, Beidou. With Gorou still a few weeks away from joining the roster, players are anticipating more story content for this clay-wielding femme fatale. A small glimpse into Beidou's life was shown several months ago with a few side quests, as well as the main story quest featuring Kazuha and the dangerous Crux Clash tournament. But now players will be able to learn much more about Beidou with these new mini-quests and dialogue options.

In this Genshin Impact guide, we'll go over some quick details regarding the dialogue choices for his encounter event, as well as the five achievable endings.

End A – Photography lesson for two

During this story journey, The Traveler assists Beidou and the team with photography lessons, only to find that Beidou is very camera shy. To achieve this ending: There are a few dialogue choices needed to achieve this ending. During the “A Little Test” scene, the player must correctly answer at least one question to continue. Very specific to “The Photography Crew” scene, when Beidou asks where the traveler would like to take their photo, select the option: “I heard there is a fishing village near Wangshu Inn.” to stay on the path to that end. After that, during the "A Fistful of Memories" scene, when Beidou asks the Traveler to strike a pose, select either "However you prefer" or "Perhaps you can strike an epic pose" in order to reach the ending.

Scenario path: A little test > The team of photographers > The nameless fishing village > The long years > A handful of memories

During this dialogue path: The traveler attempts to take a flirtatious photo of Beidou without his permission, which ends with a humorous reaction from him. To get the ending, follow the same dialogue choices above. During the “A Fistful of Memories” scene when Beidou asks the traveler to strike a pose, select the “Maybe go for something a little… flirtatious? » possibility of achieving this end.

During this dialogue path, Beidou will give the Voyager a short test on how to behave as a pirate on the high seas. Although these answers can be learned by talking to the various crew members, this guide lists all the answers. correct for convenience.

Scenario path: Sailor Training > Training: The Shield of the Crux > A Little Test > The Crux of Our Duties > A Strange Transaction

During this path of dialogue, the Traveler will learn more about how Beidou and his crew conduct their business in order to maintain their living expenses. Dialogue choices selected in this scenario path will not change the outcome to achieve this ending.

Alternate: Sailor Training > Training: The Spear of the Crux > The Crux of Our Duties > A Strange Transaction

Choosing this path will give the Traveler a different test than the one above. Instead of answering the sailors' questions, the traveler will have to sail in their boat with a skipper and complete a sailing test to continue. Once completed, the story path will continue from the beginning of the “The Knot of Our Homework” path.

Scenario Path: A Special Guest > Private Chat > ​​Guili Treasure Hunt > Were you expecting someone else? > Poetic treasure > To the rightful owner, returned

When the Traveler first arrives to meet Beidou and his crew, she will ask the Traveler if they can decipher the location of the treasure from a poorly drawn map. When Beidou asks “So? Where do you think it is? select the option, "I think this is Guili Plans, just very badly drawn." » continue on this path. While dealing with several treasurers, the Traveler will be invited to follow a poem in order to discover a treasure. As your character will be standing in front of an estate, head north from the estate gates to a tree with red leaves to find a barrel buried in the ground. Dig up the barrel to continue with the rest of the dialogue choices to reach the final ending.

Ending E – Between Us

In this story path, Beidou and the Traveler decide to visit Qingce Village to go treasure hunting, but along the way, they end up resolving some villager conflicts instead, while the Traveler learns how much Beidou does for his community. To achieve this end: When the Traveler first arrives to meet Beidou and his crew, she will ask the Traveler if they can decipher the location of the treasure from a poorly drawn map. When Beidou asks “So? Where do you think it is? select the option, "I think this is Qingce Village, just very badly drawn." » continue on this path. Dialogue choices selected thereafter will not change the outcome to achieve this ending.