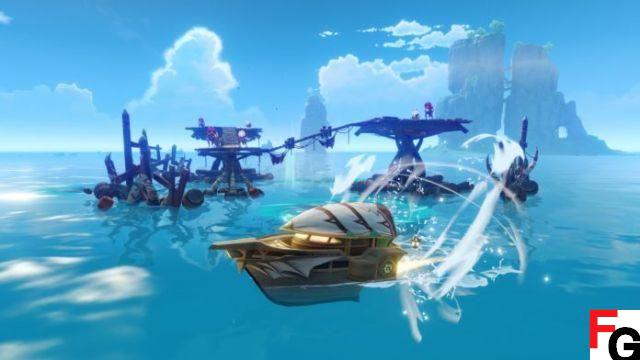 Genshin impact features many fighters, using one of the seven elements as their attack theme. Currently, there are only four characters using Hydro, but which ones are the best? There are, of course, rumors of a new Hydro user coming out, and that's a possibility with Genshin Impact's ever-expanding roster. For now, we've focused on the damage dealt by established Hydro fighters.

Barbara may not be considered at the top of the game as she has one of the lowest base attack stats. However, his ability to heal others (his build is almost entirely focused on healing) and his ability to apply Hydro moves off the field make him a fantastic addition to any party. His weapon of choice is the Catalyst, which pairs very well with the Hydro element. Barbara has a very useful skill: Let the Show Begin. Using it creates a Hydro ring around your current character. This heals the chosen character! Additionally, all enemies that should come into contact with the Ring while it is active are marked with the Wet status, allowing additional advantages in battle. However, be warned. All characters afflicted with Wet status are incredibly vulnerable to Cryo skills, including your own team. The self-proclaimed idol is a very popular character (in the game's lore), which adds to his support for healing.

Another Catalyst user is Mona Megistus. A no-nonsense astrologer, Mona is considered a top fighter pick. She can immobilize waves of enemies with a single blow, is incredibly mobile due to her evasive abilities, and can also apply Hydro moves off the field. A Cryo character can also boost their crippling skills. Mona's Ghost ability not only acts as a shield and protects your vital DPS characters from too much damage, but it also deals Hydro damage to any enemies caught in the illusion.

Four-star sword user Xingqui uses Hydro moves both on and off the field. It has the Guhua Sword ability which deals massive Hydro damage, while also applying Wet status to enemies that come in contact with it. A bookworm by nature, Xingqui is both a good fighter and a great supporter. His Hydro attacks can set up the fight for vaporization reactions and his skills can be applied to other characters.

Xingqui is a very popular choice among players due to his comprehensive skills in everything from protection to healing and dealing damage.

Fatui Harbingers member Tartaglia, also known as Childe, is considered the best Hydro user in Genshin Impact. Famous for his elemental skills that turn all moves into Hydro melee attacks, Tartaglia's bow and melee attacks also apply Hydro elements during combat. He holds the title Nuclear due to his Elemental Burst Havoc: Obliteration. His move has two forms - Bow Stance and Melee Stance - and both deal massive Hydro damage. Tartaglia's moves can also create great combos with Cryo and Electro elemental users. The only real downside to his character is the cooldown which can be quite long if not handled properly - though its benefits certainly outweigh the cost!

Genshin Impact: How to Build Ayaka as an Elemental DPS ❯

add a comment of Genshin Impact: Every Ranked Hydro Character