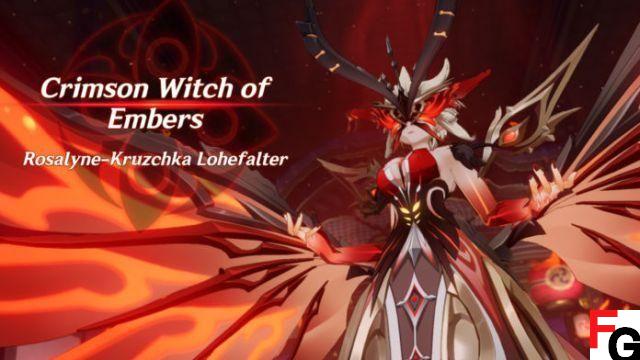 Genshin impactVersion 2.1 brought, as part of the conclusion to its Inazuma arc, an epic new weekly boss fight where travelers face off against none other than Rosalyne-Kruzchka Lohefalter, also known as La Signora, the 8th of eleven Fatui Harbingers. That said, we are now going to walk you through how to beat La Signora and complete Narukami Island: Tenshukaku Domain.

The boss fight is split into two distinct phases, the first in which La Signora uses Cryo and the second in which she reveals her true power as the Crimson Witch of Embers. For this, it is advisable to take at least one character capable of inflicting high damage on both stages of the fight, such as Xiao or the Electro Shogun. Using both a Cryo/Hydro DPS and a Pyro can work even better.

It's also essential that you bring powerful healers, such as Bennett, Qiqi, Diona, Jean, and Barbara, although she's not the best for it thanks to La Signora's Cryo phase. Remember that your highest priority should be keeping your DPS healthy and ready to deal massive damage. If you have Bennett's Sixth Constellation, you can turn any DPS into a Pyro (kinda), which is a plus. The use of supports capable of generating shields, such as the Zhongli, is also advised in most cases.

To be able to win the fight, you must know how to position yourself and use the environment to your advantage. With that, focus on frequently using the Frost Eyes and Flame Hearts placed at the four corners of the boss arena so you can counter the frequent elemental damage. During the first stage of the fight, stay mobile to dodge the spikes and projectiles thrown by La Signora. Once her health is depleted, she will summon a giant ice cocoon. To destroy it, use Pyro and attacks imbued with Crimson Lotus Moths, which will appear in the room to speed up the process. It is also a good time to heal and prepare for the second stage.

In the second stage of the fight, La Signora will reveal her true identity as the Crimson Witch of Embers. To defeat her, use elemental reactions to increase your damage. It's vital that you keep your DPS healthy, so when it's time to destroy the Eyes of Frost, be sure to switch characters. Other than that, focus on dealing frequent damage to him while keeping your DPS alive.