Genshin Impact Radiant Spincrystal: How to Use and Mod Serenitea Pot Music Weilong Mao | 11 2022 How to put familiar tunes in your teapot. 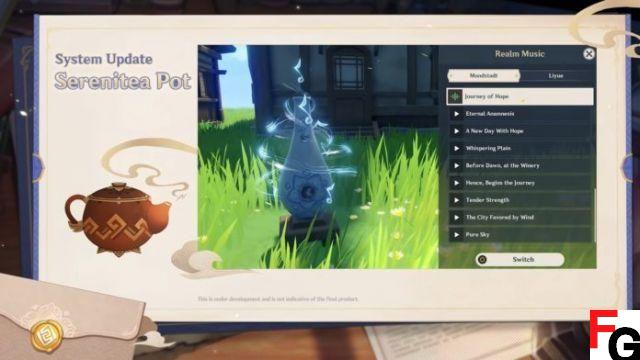 Tired of the default music that plays every time you enter the teapot genshin impact? With the release of patch 2.4, Mihoyo is fixing some furniture that will allow players to customize their teapots even more, this time, specifically, the ability to change the interior and exterior music of the realms within their teapot. which the player has access to since patch 1.5. This guide will illustrate the process needed to obtain the furniture required to change BGMs and how to unlock music tracks that the player might be interested in.

What are Radiant Spin Crystals

Radiant Spincrystals are what players will need to change the music in their teapot to Genshin impact, they are obtained from the Traveling Salesman Chubby, who only appears in the Serenitea pot from Friday to Sunday, selling goods, including furniture and pets. With the release of patch 2.4, Chubby will also sell Radiant Spincrystals in his shop, two at a time, with each crystal costing 100 realm currency. It is necessary to note that each crystal contains only one track, and the tracks it contains are determined by the numbers given after the name of the crystal.

Here is a list of available tracks and which number corresponds to which track.

How to Change Teapot Music in Genshin Impact

Now that the player has purchased the necessary furnishings, he must place them in his teapot. When approaching the furnishing, a prompt to change the music will appear and clicking on it will take the player to the music menu screen. Players will already have access to a few tracks they can switch to, but the selection will be far from the robust offering that was shown in the Livestream for Patch 2.4. This is where Radiant Spincrystals come in. If players entered this menu with Radiant Spincrystals in their possession, unlockable tracks will appear that correspond to the respective Radiant Crystals they have purchased. After choosing to unlock the respective tracks, players will be free to switch to and from the new music they have acquired for themselves.


For avid collectors of music tracks, it is always possible to negotiate and barter with friends and playmates so that visits can be made to their teapots on weekends to browse their Chubby's wares. He might just have the right radiant crystals that haven't been obtained yet.

add a comment of Genshin Impact Radiant Spincrystal: How to Use and Mod Serenitea Pot Music Weilong Mao | 11 2022 How to put familiar tunes in your teapot.