Ghost of Tsushima: Legend of Black Hand Riku Guide - How to Get Sarugami Armor 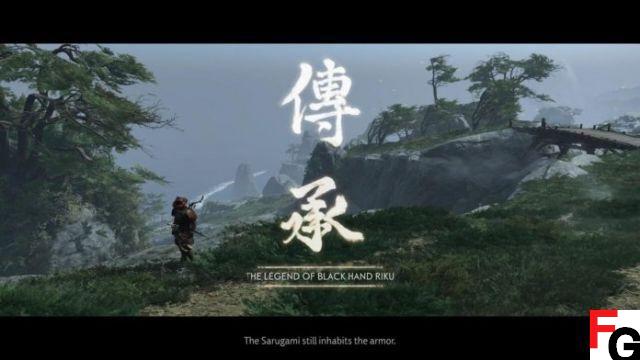 Ghost of Tsushima: Director's Cut is finally here, and players can find a mythical tale called The Legend of Black Hand Riku shortly after arriving on Iki Island. Like the Mythic Tales in the base game, this quest rewards players with a special set of armor: the Sarugami Armor. This armor set features a unique perk that puts an interesting twist on combat, so players should definitely seek it out when starting the expansion. Here's how to complete The Legend of Black Hand Riku and get the Sarugami Armor in Ghost of Tsushima: Director's Cut.

How to Start Legend of the Black Hand Riku

To start The Legend of Black Hand Riku, talk to the Kashira at Fune's Refuge. This settlement is unlocked very early in the story of Iki Island and can be found on the west coast of the island. When you arrive, he will tell you the story of the legendary Black Hand pirate Riku, who suffered a mutiny at the hands of his crew. Rumor has it that his armor is hidden in a cave on Iki Island which can be found by following strange glowing water that appears at night.

Find the glowing water on the northeast coast

The northeast region of Iki Island has many cliffs and islands, so it's a bit difficult to cross. Fortunately, there is an easy route you can take. Head to the location shown on the map above just south of the Thunderhead Cliffs and you'll find a wooden balcony with a grappling hook swing hanging from a cliff. You can jump into the pool of water below without taking any damage, which puts you a short distance from the cave.

If you see monkeys, you are going in the right direction. Once you get to the cave, head inside to continue your search for the Sarugami Armor.

The cave is almost dark, so you'll need to use flaming arrows to light the path ahead. There are unlit braziers scattered around the cave, and you can ignite them if you shoot them with a Flaming Arrow. There are arrows you can loot all over the cave, so don't worry about running out of ammo.

The braziers emit a faint glow in the dark, so you should be able to see them as they stand out against the dark interior of the cave. You can also aim with a Flaming Arrow equipped to give you a makeshift torch. It works fine in a pinch.

The cave spins and turns, so it's easy to get lost, but if you light each brazier, you should be able to tell where you've been and where you haven't been before. There are also a few chests with materials hidden in the cave, so keep an eye out for those. Eventually, you'll come to a door that you can lower with your grappling hook. Inside, you'll find Black Hand Riku ready for a duel.

Black Hand Riku is a tough foe armed with aggressive attacks and tricky timing. Before you start the fight, make sure you have decent armor with good perks equipped. Using Sakai Clan Armor is recommended as it applies a major melee damage boost and massive health boost, which will help you defeat Black Hand Riku.

During the duel, don't try to dodge anything other than his unblockable red attack. Riku attacks with flurries of blows, so even if you dodge the first hit, he will catch you on the next hit. Focus on parrying his attacks when you see the white indicator. Also make sure you are using Stone Stance as it is effective against swordsmen.

Black Hand Riku's trickiest move is his unblockable red attack. It's a deadly spin that will take a large chunk of your health bar, so avoid rolling whenever you see the red indicator. Luckily, it starts slow and is telegraphed well in advance, so you should be able to dodge it as long as you're looking for it.


Once the fight is over, keep moving forward and escape the cave. You'll find Mongols outside, giving you the perfect opportunity to test out your new armor.

Once Black Hand Riku is killed, you will be rewarded with the Sarugami Armor and Sarugami Helmet. The helmet is just cosmetic like the other headwear in the game, but the armor has great benefits.

Wearing the armor disables your normal parry ability. You can only perfect the parry while wearing the Sarugami armor. The set also turns a perfect parry into a chain of two attacks, and a perfect dodge will also deal damage to nearby enemies.

Perfect dodge and parry windows are slightly increased when wearing the armor as well, so the game will be a bit more lenient with timings while wearing the armor. You will also earn Resolve much faster with armor equipped. Sarugami armor promotes a risky style of play, but the payoffs are worth it.

Ghost of Tsushima - Which horse is the best to choose? ❯

add a comment of Ghost of Tsushima: Legend of Black Hand Riku Guide - How to Get Sarugami Armor