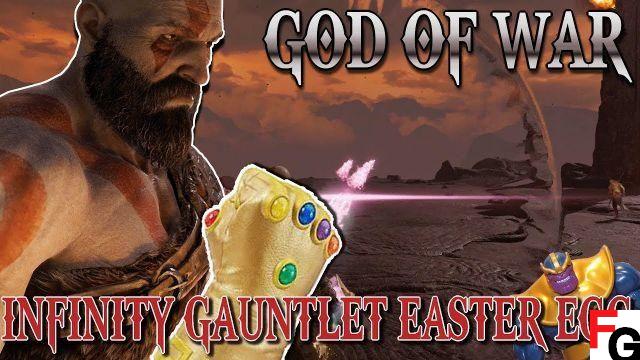 It's all there in the title. The Infinity Gauntlet (of Marvel's Avengers: Infinity War fame) basically appears in God of War, and it fires purple lasers.

The Infinity Gauntlet (and those Infinity Stone McGuffins) are currently tearing up cinemas across the country, thanks to a little movie called Avengers: Infinity War. Big man Kratos, our hero in The Last God of War, can get his own Infinity Gauntlet - and he fires purple lasers, because why not.

This is a legit easter egg and one of the coolest in the game, if you're ready to embark on your own Infinity Stone hunt. Rest assured, it won't take 18 films and a shared cinematic universe to find them all.

The hubbub here surrounds a certain talisman that players can acquire in God of War - something called the Shattered Gauntlet of Ages. It doesn't look that impressive at first, but once you insert some of those "Infinity Stones" it becomes a monster weapon.

Before we get started, here's a quick primer on the Infinity Gauntlet – if you haven't seen the movie, don't worry, there are no spoilers here. Basically, the Infinity Gauntlet is a cool big golden gauntlet that Thanos acquires - Thanos is a purple titan who wants to destroy things - and the gauntlet can be equipped with up to six Infinity Gems. Get them all, and you essentially have control over all of creation.

Unfortunately, you won't have control over everything and everyone in God of War, but you will get the next best thing: purple laser beams! Sorry, I can't help repeating it. Let's break it down.

The Easter egg comes in the form of a talisman called the Shattered Gauntlet of Ages. The description of this special gauntlet is what matters most – “An ancient relic of Hel deemed too powerful to remain whole, fragments of its former strength are scattered across the realms…”.

Just like the Infinity Gauntlet! And that description doesn't lie either. You can collect six special enchantments (or gems) that unlock the glove's full potential. Once fully upgraded, you can insert three of six unique gems. When three (out of six) are inserted, you unlock the special power.

Insert three of these six and you will get the full power of the glove – the ability to fire a violet laser projectile! Okay, it's not that strong, but it's pretty cool (and totally hilarious) so we're counting this all as an easter egg. It doesn't just fire a single laser - it launches about five explosive blasts from the first. We're going to the Infinity Five Knuckle Shuffle.

Without enchantments equipped, all you'll get is a simple super punch and shockwave. The trickiest part is actually upgrading this thing to carry three enchantments.

Once you have all four Dragon Tears, you can upgrade the Shattered Gauntlet and start throwing super powerful, energized punches at your enemies. It's like being Thanos! Well, the purple part is the same, anyway.

add a comment of God of War (2022): Yes, there's an Infinity Gauntlet easter egg and it shoots purple laser beams