Guardians of the Galaxy: Do the math or skip the math? Diego Perez | October 25, 2022 Should we ignore the obvious? 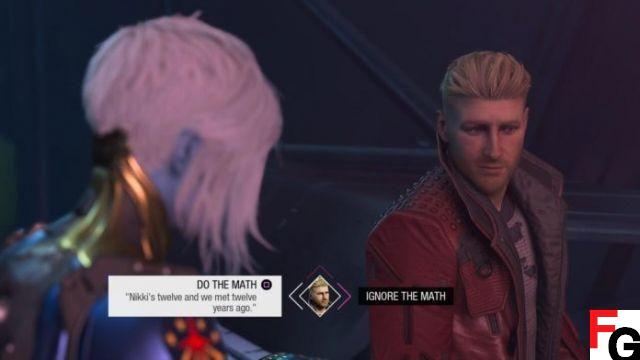 In Chapter 4 of Marvel's Guardians of the Galaxy, you have a choice to do the math or skip the math. This choice refers to Kor-El's daughter, Nikki, who Star-Lord discovers is 12 years old. Kor-El and Peter had an affair 12 years ago, so he puts two and two together and realizes the child could potentially be his. When talking to Kor-El, you can choose to face the truth head-on or play dumb. Here's what happens if you do the math or skip the math in Guardians of the Galaxy.

Should you do the math or skip the math in Guardians of the Galaxy?

If you choose to do the math, Star-Lord will mention that he might be Nikki's father since he and Kor-El were together 12 years ago and his age fits that timeline a little too well. Kor-El will deflect and say that Peter hasn't changed at all, then the scene continues as normal.

If you choose to ignore math, Peter does the most Star-Lord thing imaginable and decides to talk to the toy Chewie to change the subject. After playing with the toy, he puts it down and the scene continues as normal.

This decision has no major effects outside of dialogue changes in this scene. There are no lasting consequences, so feel free to choose the option that's right for you. Regardless of what you choose, the Nova Corps always end up fining the Guardians based on the choice you made earlier in the chapter. The fine will vary from 7 to 000 units depending on whether you chose to hide the creature or the technology earlier in the chapter.

Marvel's Guardians of the Galaxy has several choices like this, and some are far more important than others. For the most part, however, the choices only affect dialogue and other minor things. Some of them, however, have lasting consequences. Because there's really no way of knowing which decisions matter and which don't, it's best to treat every decision as if it matters.

Marvel's Guardians of the Galaxy is available now on PC, PS4, PS5, Xbox One, Xbox Series X|S and Nintendo Switch.

Guardians of the Galaxy: Should You Sell Rocket or Groot? Thomas Cunliffe | October 25, 2022 What will it be? The tree or the raccoon? ❯

add a comment of Guardians of the Galaxy: Do the math or skip the math? Diego Perez | October 25, 2022 Should we ignore the obvious?