Hood: Outlaws and Legends - How to Get New Weapons and Armor 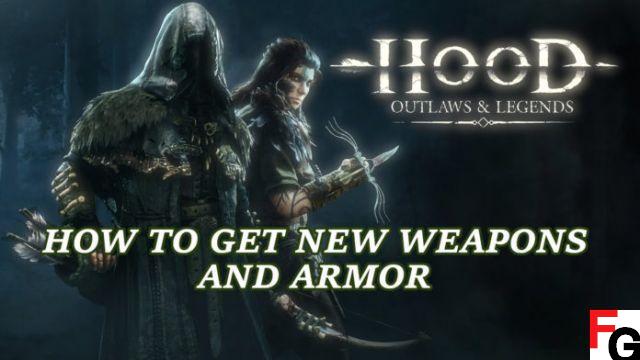 Hood: Outlaws and Legends is finally available for those who pre-ordered and purchased the game digitally, and like any other action game, finding new weapons and armor will be one of your first thoughts as you begin to complete some heists. After a successful raid, you come back with a good amount of gold, in case the enemy team allows it of course, and you wonder where and how to use this money to improve your equipment. If this all sounds like something you're really thinking about, take a look below to see how to get some new weapons and armor/clothing.

How to get new weapons and armor in Hood: Outlaws and Legends

After completing a heist in the game, you receive the gold you managed to earn from the enemy team and experience points to your player account and the character used respectively. As for the character, the more you level it, the more options you unlock in terms of gear and perks. New weapons and armor don't drop from enemies or successful missions, but they unlock as you level up with a specific class.

For example, if you level Robin up to level 6, certain gear will be unlocked for you to grab, for that particular character. Back in your lair, if you go to the kiosk at the other end of it and interact accordingly, you'll be able to see all the weapons a character can unlock. By glancing at the left side of the screen as you scroll through the list of weapons, you will be able to check the requirements for each weapon. By upgrading the character to a certain point, or by fulfilling some very specific requirements therein, unlock more and more weapons. That said, each weapon is essentially the same in terms of stats, but the appearance changes and it's harder to get weapons on the higher end.

Armor and clothing are also unlocked the same way as weapons. Level up the specific character or complete special request tasks, and you will be able to change your character's appearance with a new fashion. Unfortunately, this might feel a little underwhelming for someone who would rather loot gear or tie it to stat changes, but to keep it as balanced as possible, the team decided against going this route.

Finally, after unlocking any type of equipment, to get it you need gold that you earn from heists. In simple terms, collect gold from the treasure chests you manage to extract, unlock the equipment you want by meeting all the necessary requirements and use this money to finally get it for your character. You'll be replaying Heists often in Hood: Outlaws and Legends, as that's the nature of the game, so rest assured you'll be collecting more than enough gold than you actually need to get everything you need. you want.


Hood: Outlaws and Legends is available on PlayStation, Xbox and PC. For more content on the game, feel free to check out the rest of our guides here.

Hood: Outlaws and Legends – Is it single player? ❯

add a comment of Hood: Outlaws and Legends - How to Get New Weapons and Armor