Hood: Outlaws and Legends – Is it single player? 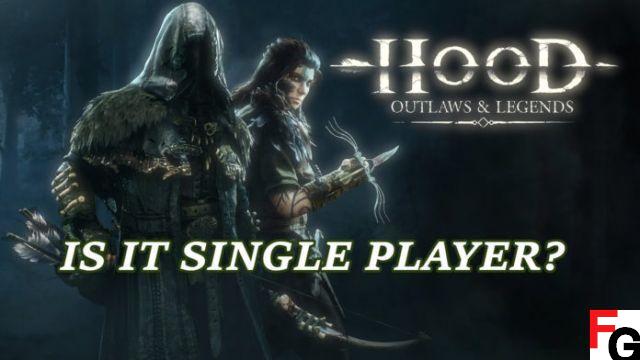 Hood: Outlaws and Legends officially hit shelves today, and many gamers are already wondering if there's any single player in-game mode. This popular new PvPvE title pits two teams against the AI, and themselves as well, in an effort to steal the sheriff's chest and extract it to their respective lair. Gold is earned and you choose to keep it all to yourself or share it with the "poor". The concept is great for an arena game, but can you actually start a few heist runs on your own, without the competitive aspect between two teams? Let's find out.

Is there a single player mode in Hood: Outlaws and Legends?

After starting a heist, you and three other real players join forces to try and steal the state vault. In the meantime, four other players are created on the map, with the same objective. The “winner” is the team that manages to extract the most gold from that chest.

To actually reach the safe, you must first steal the sheriff's key, then search for the safe that houses it. You and the other party members then carry that box to the extraction point and try to extract it to your own lair without letting the enemy team do the same.

Which brings us to the current question. Can you do all of this by yourself? If you're looking for a short answer, no, you can't. Hood: Outlaws and Legends is basically a multiplayer game, like other similar IPs like Dead by Daylight and so on. It's a competitive PvPvE game, focused on defeating the enemy team, hence why there is no single player mode.

That said, there are some things you can do on your own. There's a training area in your lair, which you can take advantage of and practice with your characters, and there's also a pure PvE mode, which simply throws you into one of the available maps, on your own. You have no goals or teams to fear, and there is no goal either. This is a 'virtual' stage to test out everything you've learned and try to keep notes on the map layout. You can traverse the terrain to lean into its nooks and crannies and practice your combat abilities with NPC enemies. Whenever you are ready, leave this area and switch to normal matchmaking, against other people.


In conclusion, are there any solo activities you can do? Yes there is. Can you play the normal game solo? No you can not. Which is the case for now, since the game has just been released. Who knows what the future holds, and over time we might even see a single player mode or even a campaign emerge for Hood: Outlaws and Legends.

Hood: Outlaws and Legends is available on PlayStation, Xbox and PC. For more content on the game, feel free to check out the rest of our guides here.

add a comment of Hood: Outlaws and Legends – Is it single player?