How To Recruit Miss Fortune In Ruined King: A League Of Legends Story Noah Nelson | November 18, 2022 Here's how to get Miss Fortune on your team! 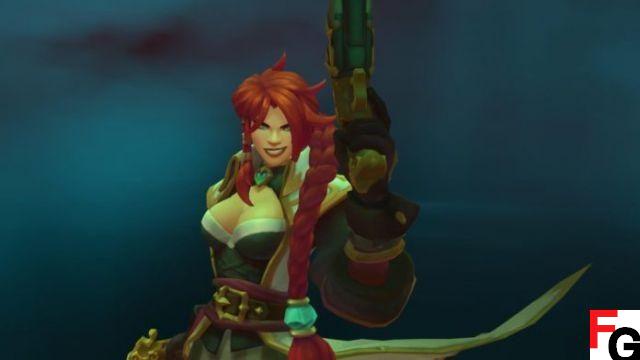 With a surprise release at the Riot Forge showcase on November 16, Ruined King: A League of Legends Story is unexpected, yet much-loved. From the creators of Battle Chasers: Nightwar and Darksiders Genesis, Airship Syndicate has teamed up with Riot Forge to deliver a one-of-a-kind turn-based RPG in the style of League of Legends. Yes, this game is standalone and no, you don't need to know anything about League of Legends to play it. If you're looking for guides on how to catch fish or solve The Way is Shut quest, look no further, and many more are on the way to help you master Ruined King.

How to recruit Miss Fortune in Ruined King

Miss Fortune is an incredible champion in Ruin King. In order to recruit her to your team, you'll need to play a good chunk of the game. Around six hours later, at around 40% game completion, you'll be able to unlock Miss Fortune just by playing the story. She becomes a member of your team once you complete the quests in the Gray Harbor area. Once you return to the Fortune Domain and tell Miss Fortune that Gangplank has returned and is working with Black Mist, she will reluctantly join your quest.

How to play Miss Fortune

Miss Fortune is a damage-focused and buff-focused champion. She's best at annihilating multiple targets at once instead of dealing heavy damage to an enemy like Yasuo, for the most part. To make the best use of her build, you can focus on increasing her haste with her Strut buffs so that she's hard to hit. You can also just focus on increasing his crit rate, which makes all of his attacks much harder. The Crit Rate strategy pairs particularly well with Yasuo's Crit Buffs.

A good way to play her is to use her Tapped abilities, which essentially add bonus damage to enemies marked with Tapped. While one of your allies is taunting and defending, you can use Double Up to deal damage and mark two enemies with Tapped. Then, on the next turn, you can use Heart Breaker to deal massive damage to a single engaged enemy. Ruined King is great because you can constantly customize how you play with individual and team champions.

add a comment of How To Recruit Miss Fortune In Ruined King: A League Of Legends Story Noah Nelson | November 18, 2022 Here's how to get Miss Fortune on your team!