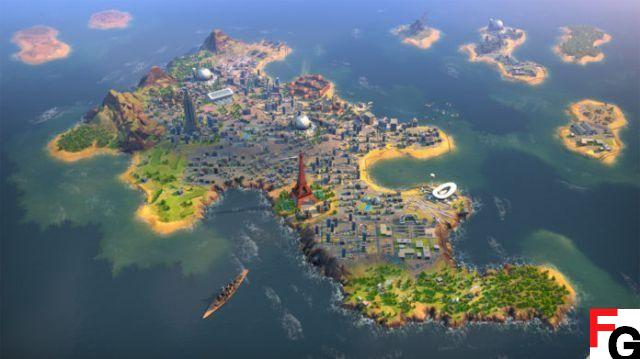 Humanity is a massive new 4X set to shake up the genre with new ideas, new cultural identities to explore, and exciting gameplay that lets you enjoy every hex in the world. Instead of locking you into a single culture, Humanity lets you evolve across multiple cultures – adopting whatever cultural traits you choose as you evolve through each era. Whatever your playstyle, you can conquer the world through farming, expansion, trade, science, and more. The wide world is your oyster, and on the toughest difficulties it can be a cruel world.

You will have to deal with greedy neighbors trying to claim as many people as possible. And once your civilizations flourish, the AI ​​will attack if it sees an opening. Even an agrarian society needs a solid defense, and the best way to keep your society alive is to make it prosperous as soon as possible. These are 8 simple tips every Humanity player should keep in mind before attempting to rule the world.

And don't miss the Humanity personas system, allowing you to upload and share special custom leaders.

In the Neolithic era et ancient era, early players will want to focus on cultivation and rapid growth. Expand your borders and destroy as many farms as possible. If your employees aren't used elsewhere once you move into a new era, create as many Maker's Quarters as possible to improve your production.

Expand to halmets and build farms (the Culture harappéenne has unique farms which are very good) so as not to clutter up your towns. Zhou and Harappan are very good starter cultures – warrior cultures are difficult to manage in the early game, and defending your borders is much easier in the early stages. If you already have a lot of good farms, you can quickly expand, produce food and start swimming. +Or et +Sciences once you move on to the next era.

Maker's Quarters is amazingly good. You can quickly reach Production 400~ in your cities by simply filling all those empty spaces with Maker's Quarters. If you have a lot of food and extra population, ignore unique buildings and unique units for your culture and run those maker quarters! If you're not focused on fast growth (and high production), you'll quickly run into problems in future eras.

But, it's not always a good idea to move on to the next era. Let's talk a bit about how eras work.

#3: Why You Might Want To Stay In An Era Longer

Entering new eras gives you access to new cultures, new technologies and bonuses for each citizen. To enter a new era, you must terminer 7 Era Stars. These are sub-missions related to each of the three main cultural affinities. There are 21 Era Stars au total for each era. Technically, you can stay in the Neolithic Era for as long as you want, even after completing 7 Era Stars – you can complete all 21 Era Stars if you want!

And there is a good reason for that! Completing Era Stars gives you Fame. Renown is your civilization's general renown, and the more you have, the "powerful" your civilization is. Fame is the number that usually gives you a good idea of ​​a civilization's advancement/strength, and completing Era Stars is how you earn it. But, these cultural bonuses of the future era are also important. You will have to decide when and if you are ready to enter the next era.

As you progress, your neighbors will be watching you like a hawk. If your army is too weak, the Humanity AI will invade. They are surprisingly aggressive and they will jump if they think you are easy picks. Always keep a robust army patrolling your borders – if you're into farming a lot, you should be able to feed and pay your troops without too much trouble. The tricky part is deciding when to go to war yourself.

Going to war means you can take cities without spending influence. Either way, you'll need an army, so why not use it? You will get Era Stars while fighting naturally, as well as the Era Stars you are already chasing. In classical times, you (or your neighbors) can select the Huns Culture, which is one of the strongest in the game. The Huns can quickly multiply their troop numbers and sweep through territories. You can take your neighbors out early just to prevent it!

#5: Why take over when you can puppeteer?

In Humanity, if you decide to take an expansionist path of warfare, you don't have to completely rule over your defeated neighbors. Instead, you can require to create a vassal state. Once you have gained enough control over your enemy in a war, you can force your enemy to accept surrender through a Peace treaty, and asks to turn the remaining towns into puppets. You will earn constant resources without having to micromanage them. You can make more requests later, and they act as a good buffer between you and other companies that might come for you next.


#6: Trading is important and easy to ignore

do not forget trade. Trade is important for acquiring rare materials like saltpetre which is required for some iconic units. Once you have a good supply of gold and science in your civ's coffers, it's a good idea to start mining trade as much as possible. Even if you don't have a cash crop, it's a good idea to just buy every rare luxury resource they are available. Go crazy and get it all! The benefits are long lasting.

Very rarely will you have all the resources you need in your area. Iron, bronze, and horses are some of the most valuable (and rarest) resources at the start of the game. Trade for them!

#7: And Deserts Aren't As Empty As They Look

Deserts are actually one of the best places to start on any map. Deserts are filled with rare materials – farming can be more difficult, but rare materials are out of this world. Going to the center of a large continent is also much easier than water… at least, in general. Getting the technology to explore vast oceans takes time. The time you don't have! Your starting eras are all about expansion, and you can't grow without ships.

Another early tip - in the starting eras, you'll have to deal with annoying independent factions taking over your lands and establishing outposts. At the start of your expansion, try to find and burn their encampments/redoubts. Once you destroy them, the gray factions will decline on their own. Or you can choose to gift them one of your outposts. They'll stay put, be friendly, and you can easily conquer/assimilate them into your civilization later.

Eventually, the Independents will turn this outpost into a city! You should have no problem picking it up whenever you see fit. If they form a military unit, you can be sure that their population has reached its lowest level, so you can quickly conquer the city after destroying their unit.

These are just our beginner tips for players who are still exploring the early stages of humanity. It's a vast game, and even with the huge in-game knowledge encyclopedia, it doesn't always explain what you need to know when it comes to actually playing. Give these tips and give it a try, and I hope your civilization can flourish in modern cultures!

add a comment of HUMANKIND: 8 tricks to dominate the world | Beginner's Guide