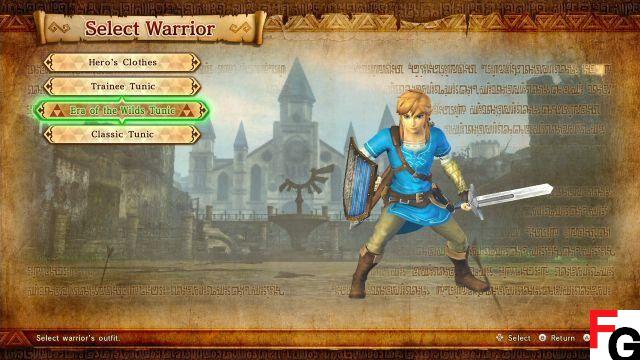 Fans of the Legend of Zelda series can get another taste of the series' lore and characters carried over into the gameplay style of the Warriors/Musou games now that Hyrule Warriors: Definitive Edition was released on Nintendo Switch. While this is certainly the best version of the game to date, the way it brings together all the DLC and content from the previous two versions of the game means that certain aspects of it cause a bit of confusion.

Anyway, let's go with the first of these questions...

How to change costumes in Hyrule Warriors Definitive Edition

First thing is first - before you can change of costume you'll obviously need to make sure the character you want to use a costume with is unlocked. If you want to know more about that, be sure to check out our Character Unlocks Guide, which explains in detail when and where you can unlock each character ŌĆō because even DLC characters have been given unlock conditions in this news. version of Hyrule Warriors.

Once you've actually unlocked a costume, you can use it in any mode ŌĆō all you have to do is head to character select, then when hovering over the character you want, press X. That's before picking a weapon (remember, you can easily unlock high tier weapons with the amiibo scan). This will bring up the menu you see above, and it will allow you to choose from your unlocked costumes.

From the start of Hyrule Warriors Legends, you will have access to two additional costumes: Era of the Wilds clothing for Link and Zelda. However, there are many other costumes, most of them unlocked by progressing through adventure maps based on the various zelda games.

While this one might seem like an obvious answer to those who've managed to do it before, you'd be amazed at how many people struggle to find the co-op play option for the main game - and partly because invites him to launch Hyrule Warriors Cooperative Multiplayer is just a relatively small line of text.

So the first thing you need to do is complete the first Legends Mode mission. This unlocks pretty much every major feature of Hyrule Warriors Definitive Edition, including the ability to play multiplayer. Once done, select another mission in this mode or free mode and head to the character selection screen.

Instead of selecting a character right away, click/press the left stick on either controller. This will bring up the Nintendo Switch controller configuration and allow you to select your controllers. On this screen, enable player two and configure their controller. Once you leave this screen, you can both select a Warrior and engage in cooperative play!

How to Unlock My Fairy Mode in Hyrule Warriors Definitive Edition

If you haven't played any of the other versions of Hyrule Warriors, one particular menu item might seem rather elusive - the 'My fairy'option. If you choose to go through the main story of Legend Mode first, as many probably will, you might be surprised to find that this menu option remains locked - but unlocking it is fairly simple when you know how.

If you don't know, My Fairy is a mode that was added to Hyrule Warriors Legends on 3DS and is back for Hyrule Warriors Definitive Edition. Companion fairies can be recruited and act as partners for each playable character in true Ocarina of Time's Navi tradition. You can have lots of fairies as friends, but you can only battle one at a time ŌĆō and each fairy is unique with their own unique abilities and stats.


Over time, you can level up fairies to make them more robust. To unlock My Fairy mode, you need to find a fairy. This is done in adventure maps - just look for the fairy icon before entering a battle, or press the Y button to change the view so that the map actively shows fairy missions, like this:

Once in this mission, you'll have to try to find a fairy the same way you do in many Zelda games - by breaking pots! Don't confuse these fairies with the elemental fairies that sometimes arrive in adventure mode, or with the great fairies - these are different things, and you'll know when you find one because the game will alert you with a menu screen.

Break pots in dungeons and capture dungeons ŌĆō often fairies can be found a little off the beaten path in the mission, so don't be afraid to explore. Once you find your first fairy, the mode will unlock in the main menu, allowing you to manage your fairy's growth ŌĆō but keep looking for more as you play the adventure cards so you have the most powerful fairy companion possible.

Far Cry 6: 7 quick tips that will make your life in Yara easier ❯

What is the rarest Pok├®mon GX card?

add a comment of Hyrule Warriors Definitive Edition FAQ: How to change costume, unlock my fairy and play co-op multiplayer on Switch