List of Nintendo Switch Online Nintendo 64 games: all the games available at launch 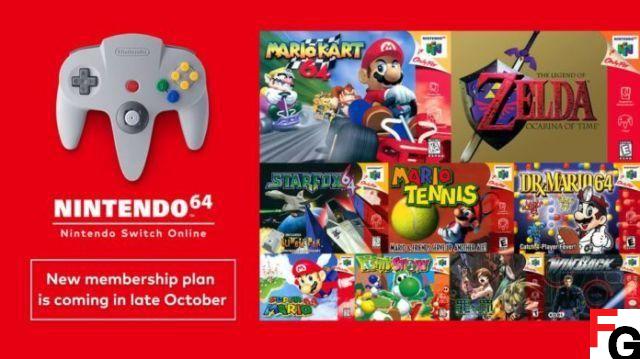 Here's the current lineup of Nintendo 64 games coming in the expansion pack.

The list is short at the moment, but the starting titles are very promising. Of course, this service will add more titles in the future, which they have already shown. These are the future titles that will be released after the initial launch of this program.

There is no current release date for the games listed.

Another benefit of this additional level of online subscription is that all games that have local multiplayer will also have online play implemented. This means you can play games like Mario Kart 64, among other titles, online and with up to 4 people at a time. Of course, every player involved will need to have the Nintendo Switch Online + Expansion Pack subscription.

Just like Nintendo did with the release of the NES and SNES collections, they will be releasing a full-size Nintendo 64 Wireless Controller as an extra item for people who purchase this subscription. It will be priced at $49,99 USD.

Think of this new Switch Online plan like how Microsoft has its Xbox Live Gold subscriptions and Game Pass Ultimate system. One of them is just a monthly online subscription which allows players to access to play online and also get some freebies every month. Game Pass Ultimate enjoys the benefits of gold and additional games in its catalog.


This new membership plan will be rolled out at the end of October this year (2022). There is no confirmed exact date yet. The new plan will also not be part of the original subscription plans. They are separate and will have different prices accordingly. The Online Expansion Pack+ also doesn't have a fixed price, and hopefully it won't be a dramatic price difference between the standard and this one. You can view more details by clicking here.

add a comment of List of Nintendo Switch Online Nintendo 64 games: all the games available at launch