Madden 21 - How To Move The Defensive Line Pre-Snap 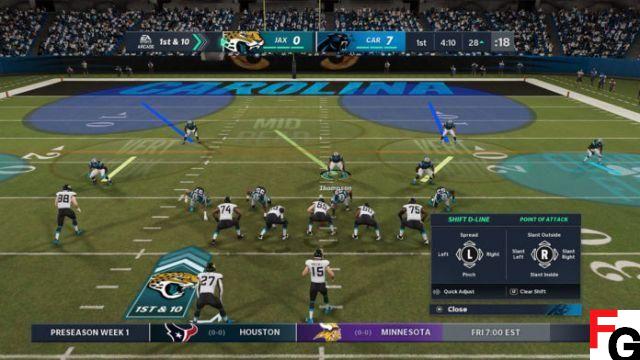 Picking the right defensive play in Madden 21 will be critical to your success, but sometimes it just won't be enough. Before the snap, there are many other things you can adjust to strengthen your defense to better prepare you for attacking play. Having the defensive line properly tuned can play a big part in this, whether you're pinching them inside or trying to spread them out. This is why knowing how to do this is so important and this guide will tell you how it can be done.

How to move the defensive line pre-snap

Madden has changed some of the pre-snap control schemes over the years, while some have remained the same. The defensive line pre-snap adjustment is one that has changed a few times, but is still as vital as most of the other options.

The defensive line controls the line of scrimmage in football, with a well-organized line being able to easily cross the offensive line and reach the quarterback or poke the running back into the backfield. This can be done by moving your defensive line, which is quite simple to do.

To adjust the defensive line during the pre-snap in Madden 21, press left on the D-Pad. This will then bring up the menu seen at the top of this guide. It also gives you several different options to choose from, which will defend the situation.

If you're having a really hard time stopping the run in the middle, you're going to want to pinch the line. If you're waiting for a pass, spreading the line might be a good option instead. You can also move the line left and right if you think they are going to work in a specific way, for example if they are continuously mining one side of the field. All of these can be chosen by pressing the left analog stick in different directions.

There are also options with the correct analog stick, which will adjust the point of attack on the line if you plan to focus specifically in one direction.

Madden 22: How to Slide and Dive ❯