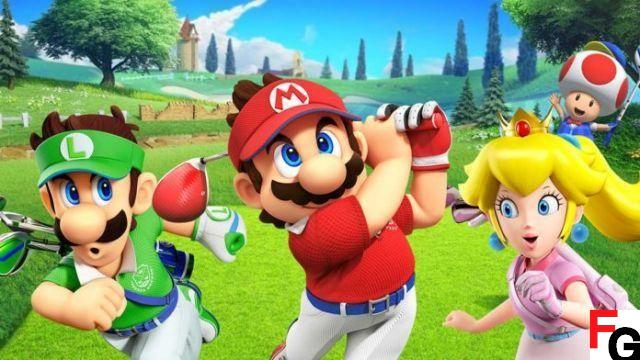 Everyone knows that Mario Golf: Super Rush is no ordinary golf game. Usually things like speed, stamina and special moves aren't something you see in a PGA Tour game. And here, picking a character that works for you and has some of the best advantages with their overall stats can keep you from bending your club in half so you don't get overwhelmed.

Here's a list of the best characters playing in the latest Mario Golf game, based on overall stats, special moves, dash moves, and some cool mechanics you might not have expected that can give you an edge:

All of these traits are ranked appropriately, based on big advantages or disadvantages on the greens. But what makes each one stand out or fall behind? Let's break it down, character by character, to understand how each works.

The mother of stars always tops this list with not only awesome specials, but also a mechanic that only two characters in the game have so far: floating. It's not just a cool way to get around: Rosalina can fly over terrain that would normally get in the way of golfers on foot, even bunkers! His dash move is decent, having a little start-up time but covering quite a good distance. And his special shot, after exploding on impact, turns balls into Star Bits, giving them an unwieldy bounce and extreme curve when putting.

The franchise superstar for a reason, Mario is still the balanced character in sports games. However, in this game, his speed is 9, which is almost the highest speed in the game. His special shot is god-level, not only giving an explosive blast on impact, but also giving him a moment of frenzy and invincibility with a Super Star. Its dash is of medium-high level, being acrobatic to overcome obstacles, but has just medium distance. And for a fairly balanced type, its driving distance becomes almost as high as other heavyweights.

Everyone's favorite green dino happens to be the fastest character in the game, at a speed of 10. What makes him the highest level despite his reduced range is his special dash. In addition to the distance the rolling egg carries him, with an additional flutter jump at the end, the egg is sent under his feet and can actually hit other players. Her special shot is basically the same as Rosalina's in terms of status effects, only the bullets become Yoshi's Eggs.

The lean, mean green brother gets a break for once, even though he still doesn't match his older brother in some areas. It has the same speed and a bit more control. But what allows Luigi to top off this tier is his ice effects brought on by his promotions. His dash and special shot leave behind patches of ice that players and bullets slide across, the dash leaving behind icy trails (although having a bit of a start-up charge and latency delay), and the shot throwing up a huge sheet of ice.

Good ol' BJ is proud of his big bad daddy, for being a classy speed guy with some interesting moves. His dash covers a great distance, and his special shot, after an impact explosion, obscures player bullets and the flagpole marker, in smoke. Plus, we really love seeing him turn around with his swings.

A shorter swing than this ghost can have, but the physical power doesn't quite become an ethereal Boo, does it? Boo is the other character after Rosalina who can float above the terrain and avoid being slowed down. His dash has no start and travels a great distance, while his special carries the same Rosalina/Yoshi effect of "haunting" balls that bounce and bend while putting.

One of the best golf club trainers, Wario stands out against other power types, just barely, due to a special that actually inflicts a unique knockdown effect. Affected players cannot touch the danger zone at the top, lest they be electrocuted and forced to fire again. It also brings a huge storm cloud that covers part of the map, blocking the view of your shooting distance. On top of that, his special dash moves through the air, hovering over players and obstacles. The only downside is that you can't crash into other golfers with it.

The tomboy flower princess hardly makes the A list. Her speed, stamina, and control are excellent for her driving distance. And while his special shot doesn't have a lot of bells and whistles on the outside to plow through players and low-trajectory balls, his dash is a bit above average for having no start and have a good leap forward to turn things around.

Although the king has the most flamboyant appearance, his skills are truly flamboyant. Despite having the second highest driving range in the game, his promotions aren't exactly exciting for his minions. A slightly above normal jumping dash with a pause on startup and a very normal special shot that only explodes on impact is all our Koopa buff really brings to this game.

The king of the swing is hardly better. In fact, he's actually a little worse, sharing identical stats to Bowser, but with three meters less range. And because his specials are also pretty much the same, it's pretty obvious he's lower on the list.

What happens when a football player tries to play golf? Pretty much what you would expect. An average Joe with decent power, which falls below other heavyweights due to less riding distance and slightly less stamina as well. Her dash is roughly comparable to Bowser and DK, but her special shot is at least different, being roughly the same plowing shot as Daisy's.

The weakest character in the game in terms of distance, our little mushroom makes up for it with speed and exceptional fire control. His momentum is also exceptional, being very agile, quick and leaping over obstacles; probably the fastest dash in the game. His special impact shot is just normal.

As an elder of old, this former king barely manages to get thrown off the B-tier battlefield, even though he's the slowest character. It has the absolute highest range and some pretty explosive specials. His momentum is above average, no start, great distance, and he leaves behind Bob-ombs that explode in a second or two. Easily one of the most offensive dashes in the game. Its special shot also doesn't miss, not only blasting a certain area, but sending a field of Bob-ombs around it, which can be triggered when other players or their balls enter their area.

It's no wonder that Peach almost completely replaced her, since the Mayor of New Donk City just huddles a bit above her while playing golf. Just having two more pieces of stamina than her, and just an extra meter of distance. However, what keeps him from being at the lowest level is that his special shot gives him a special temporary dash like Mario's. Bonus points for singing "Jump Up, Super Star!" by doing it.

Despite being S-level in many of our hearts, and certainly in stylish outfit choices, Waluigi can't really work his way up to anything higher. Its dash move has a bit of a start-up and cooldown, its range is average, and its special shot is basically a different kind of plowing.

Sorry princess. You get the lowest of corners here. While the speed and control are exceptional, nothing else really stands out. His dash has a bit of a boot and his special shot is the same as Waluigi's. At the very least, he's a great character for beginners because his control is so high and his distance so low.

Whatever character you need to enjoy the game!

Remember, the most important part of choosing the character that works best is choosing the right one. you. You can choose the best character and not be so good in the game itself. Or, you can just choose the character you find favorite, your skills, your personality or whatever. Simply make the choice that suits you best!