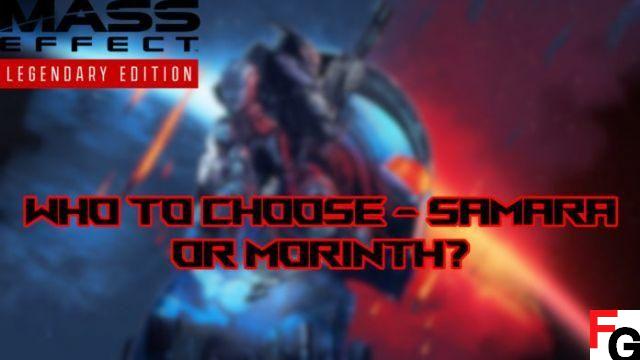 Mass Effect Legendary Edition constantly throwing hard decisions at you, with Samara and Morinthe being just one of those. You are already aware of this, if you have found yourself here, but these two are mother and daughter respectively. Therefore, choose one of the two shots twice as strong. And by choosing one of the two, we mean that the one you don't have will unfortunately perish later. This is something extremely harsh, but oddly justified by the events of the game. To find out more and to see which of the two to choose, take a look below.

As mentioned above, Samara is Morinth's mother and a Justicar. In contrast, Morinth is an Ardat-Yakshi, who instead of protecting his comrades like a Justicar, ends up killing his friends due to a genetic disease, strange as that may seem. This places the two women in two entirely different roles, one saving people and the other taking their lives. Just hearing that should make your decision obvious, but not really and certainly not easy.

To get to the point where you choose one of the two, you need to complete Samara's Loyalty Mission, which is quite a long chain quest. Doing everything (which requires a high rank of Paragon or Renegade) successfully will allow Morinth to show you his face. If you choose dialogue options that show your dominance over her, it will eventually cause her to want to mate with you, through mind manipulation.

The moment she tries exactly that, you'll have a Paragon/Renegade option. If you pass the specific test, you will eventually resist his mind control and right away you will finally have the choice to side with Samara or Morinth. At this point, there are a few interesting facts that occur.


In case you failed to pass the Paragon/Renegade test during the mindbending process, you will assist Samara by default, but you will not take any Paragon points for doing so. If you succeed, you will get points respectively, and you will join Samara as she tries to stop and control Morinth.

If you prefer to choose Morinth, a good amount of Renegade points will be added to your pool, and Morinth next to you can take Samara out for good. Then she will disguise herself as Samara and join your crew in Normandy. It's actually scary, and provides a very interesting twist of events, with Morinth now actually "being" Samara and she'll unlock her power of domination. If Samara was your final decision, she would return to Normandy with the Reaver power instead.

Consequences of choosing Samara or Morinth

It's simple. Siding with Morinth will make her a playable member of the team, but resembling Samara, as she will eliminate the real Samara first. Choosing Samara will do the exact opposite and you will return to Normandy as if nothing had happened. Morinth will have the ability to Dominate and Samara her Reaver power, so if you want to go all technical, pick the one that best suits your playstyle.

When it comes to romance, things get even more interesting. You can of course like them both, but with wildly different results. If you end up with Morinth, she will literally die if you romance her and end up mating, due to Ardat-Yakshi genetics. Hey, it's video games, don't blame us. This will permanently remove her from your crew, eventually losing them both in the process, as Samara would have already left due to the previous instance.

If you try to have sex with Samara, while she will be flattered and accept your interest in her, nothing will happen as she will end up choosing her Justicar ways over starting anything with you. Hard. Therefore, the romance with Samara will literally end nowhere, which in my opinion makes it the most boring outcome of all.


And with that, you pretty much have everything you need to know about choosing these two women. Gameplay aspects and story elements change depending on what you decide to do, so think carefully and choose accordingly.

Mass Effect Legendary Edition is available on PlayStation, Xbox and PC. For more content on the game, feel free to check out our list here.