Mass Effect Legendary Edition: How Long To Beat Each Title 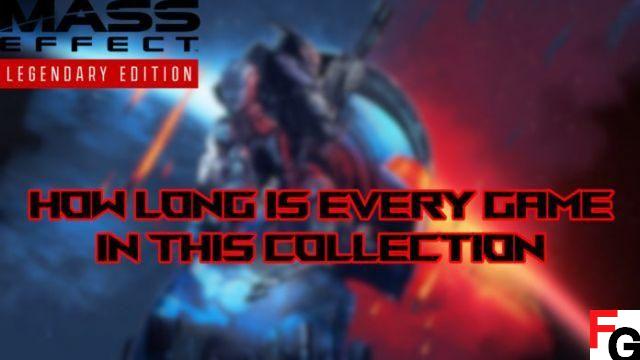 If you wanted to know how it takes a long time to beat the totality Mass Effect Legendary Edition, You are in the right place. This massive collection of three hugely popular titles, completely revamped some aspects of the series, providing a refreshing experience to the years-old trilogy. Not only did each game have a massive amount of content included by default, but the many DLCs released on the line further expanded your playtime for a lot, with plenty of new scenarios, areas to explore, and characters to interact with.

The Legendary Edition includes nearly all of the DLC released before all three games, so if you want to experience every single-player event in each game, outside of the main storyline, expect to invest hundreds of hours into Mass Effect. Legendary edition. Let's take a look at some details below.

How long to beat each game in Mass Effect Legendary Edition

Oddly enough, all three Mass Effect Legendary Edition games require roughly the same amount of hours to complete, including DLC ​​and secondary content. Moreover, these statistics are based on thousands of reports from players who have recorded their games on online forums and websites, and of course on our personal experience.

The first game in the series is the shortest of the three when it comes to its basic single-player campaign, which lasts around 18 hours. If you also want to clear all side missions and DLC content, you're looking at around 30 hours of playtime, and for all achievement hunters, you can easily hit the 45 hour mark.

While Mass Effect 2 has a longer story, resulting in more hours spent on the campaign itself, the DLC and general secondary content in this game is much shorter. That said, expect to spend around 25 hours to complete the main game, around 36 hours for all side content, and just over 50 hours if you're trying to complete at 100%, including achievements and trophies.

It's extremely weird and weirdly satisfying too, but the third and final game in the original trilogy requires almost exactly the same amount of playtime as Mass Effect 2. DLCs. can be completed within 25 hours, and perfectionists will need 35 hours for everything.

If we add up the three Mass Effect Legendary Edition titles, only the main story will require you to spend around 65-70 hours to complete. That alone justifies the price of the bundle, but when you consider that you can spend hundreds of hours doing every DLC and acquiring every trophy and achievement in the game, I'd say the price is well worth it. And we're not talking about rushed DLCs or just earning money to extend the life of the game. The Mass Effect series is known for having great stories that plug in through their added content, and some of the characters included in those- these are some of the franchise's most memorable. Not to mention how Mass Effect 3 improves when you add the DLC to its lackluster story, finally bringing us the conclusion we've always wanted for this part of the franchise, with Andromeda sitting on the sidelines.

Mass Effect Legendary Edition is available on PlayStation, Xbox and PC. For more content on the game, feel free to check out our list here.

add a comment of Mass Effect Legendary Edition: How Long To Beat Each Title