Minecraft: How to find an end portal 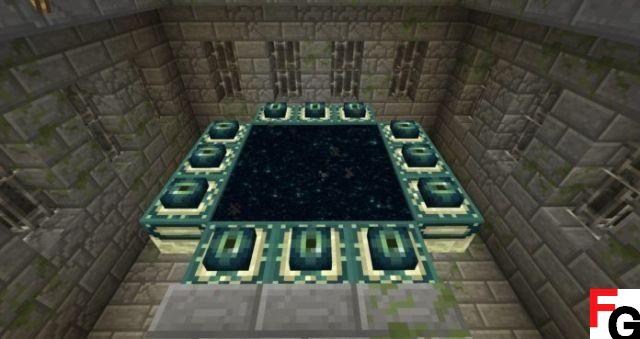 The endgame of Minecraft takes place in the dimension called The End, so we will see how to find an end portal. Something to note though, in Survival Mode, End Portals cannot be spawned in any way and must be found. However, we'll cover how to craft one at the end for those of you playing in creative mode.

How to find a final portal

End portals generate in a deactivated form in underground structures called fortresses. While it's possible to come across strongholds purely by chance, there's a much more reliable way to find them. And that's thanks to the use of Eyes of Ender. Eyes of Ender can be crafted with an Ender Pearl and a piece of Firepowder. Ender Pearls are dropped by Endermen, and Firepowder is crafted from Fire Rods dropped by Blazes in Nether Fortresses. You'll need at least a few of these to find and activate the portal, so do around 15-20 just to be safe.

Once you have them, exit to an open area and right-click with one of the eyes to throw it. It will float in the air and start drifting towards the nearest fortress. Then the eye drops to the ground and can be picked up, although there's a small chance it'll be instantly destroyed instead, which is why the extras are important. So follow the eyes until they stop going up in the air and start flying underground instead. When this happens, it means you have discovered where a fortress is buried. Dig carefully and you will find yourself between the stone walls of the structure. Explore a bit, because somewhere here you'll find an End Portal setting. Once you find it, take your eyes of ender and insert them into the empty frames to activate them. And then once you're ready for the fight beyond the portal, go ahead and jump. But beware, once you enter The End, there will be no exit portal until you defeat the dragon residing there.

Create a portal in creative mode

For you Creative mode players, creating a portal for your own builds is easy and enjoyable and doesn't require lengthy quests across the world and across other dimensions. All you need to do is remove the end portal frame from creative inventory and place it like the model seen in the image above. However, all the blocks need to be facing inwards for this to work, which can be accomplished by standing in the middle of where you want to place the portal and placing the blocks around you. Then you just need to insert the twelve eyes of Ender and the portal will light up. You don't even need the frames anymore at this point and can even break them, the portal blocks will stay there.

add a comment of Minecraft: How to find an end portal