Monster Hunter Rise: How to Get Kamura Tickets 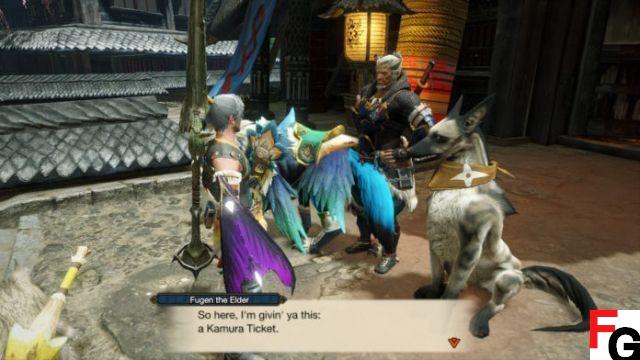 Monster Hunter Rise’s The main story campaign isn't that big, which is a good thing because it's the first requirement to unlock the ability to get Kamura Tickets. These special items are needed to create very nice armor sets, with excellent skills as well. However, they are not materials dropped by monsters, so we will see below how you can get a lot of them.

How to Get Kamura Tickets in Monster Hunter Rise

As mentioned above, the first step to being able to get Kamura Tickets is to “finish” the game's campaign, which we all know is barely over in Monster Hunter Rise. Either way, this is done by defeating Magnamalo for the first time, unlocking 5* Village Quests in the process. Right after you do and the credits roll, Fugen the Elder will chat with you to run errands.

The first side quest he will offer is Kamura's Handyman, where you will need to complete 8 side quests. Note that if you have already completed 8 before this conversation, the task is automatically completed. If so, speak with Fugen again to begin the next task.

The next urges you to scout with friends, as you will need to hire a total of 15 of them. Again, if you have already gone through this instance before speaking with the Elder, it is automatically completed.

Completing both quests unlocks two different armor sets for your hunter and one armor set for your Palico and Palamute respectively. Finally, talk to Fugen one more time and he'll happily give you some Kamura Tickets, triggering the option to now be able to get some for the rest of the game.

As also explained in the in-game tutorial, to get Kamura Tickets, you just need to complete Village Quests and Rampage Quests. More often than not, Fugen will reward you with Kamura Tickets once you complete one, which makes the acquisition process quite easy. You'll be spending time completing these types of quests anyway, so you'll get extra rewards just for that.


Kamura Tickets in Monster Hunter Rise are used to craft the armor sets mentioned above and more, so they're essential if you want to complete your collection. Join Rampage quests with your friends, you'll have as many as you need in no time.

Monster Hunter Rise: How to Get Poison Sac ❯

add a comment of Monster Hunter Rise: How to Get Kamura Tickets