Paper Mario: The Origami King – How to Find Olivia in the Forest 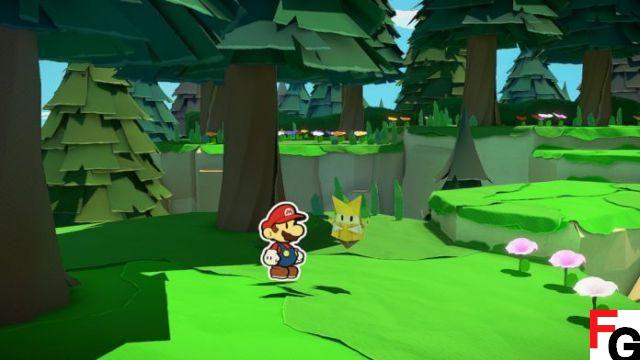 Paper Mario: The Origami King has just been released as the latest in the long-running Paper Mario series. The story setup in this one is that others in the kingdom are turned into origami and controlled by a misnamed King Olly. He is the brother of your companion Olivia whom you meet at the start of the game, who finally reveals himself after you escape from the dungeon area. Mario ends up in a tree that you have to tap on to escape, but you'll notice that Olivia is missing. This guide will tell you how to find it and how to get to where it is.

How to find Olivia in the forest

After exiting the tree, you will move left and right and you will not be able to find Olivia. This also means you can't use all 1000 arms with the platform nearby either. What you might not notice at first is that you can walk towards the screen by dropping down into the middle area.

Once you start down this new path, you'll see a hole in the ground and Olivia will be on the other side talking to you. You're going to throw what's called a bag of confetti at you and tell you to go pick up the confetti on the ground where we fell from the tree.

You'll already see confetti on the ground, but you can just smack nearby flowers with your hammer to create more. Keep collecting more confetti and look at the top left icon. When it's green, Olivia will tell you to approach the previous hole slowly, so head back in that direction.

Near the hole, you must press ZR to throw confetti in the air and they will stay in place in the hole. it may look like the platform can be partially stepped on, but don't try it or you'll fall through. Instead, keep pressing ZR over and over until the hole fills up entirely and the spot turns into green grass.


After going past the hole, you can approach Olivia and pull her off the ground by holding down A. After saving Olivia, you can now use the arms 1000 times nearby and move forward.

Paper Mario: The Origami King - Is the game multiplayer? ❯

add a comment of Paper Mario: The Origami King – How to Find Olivia in the Forest