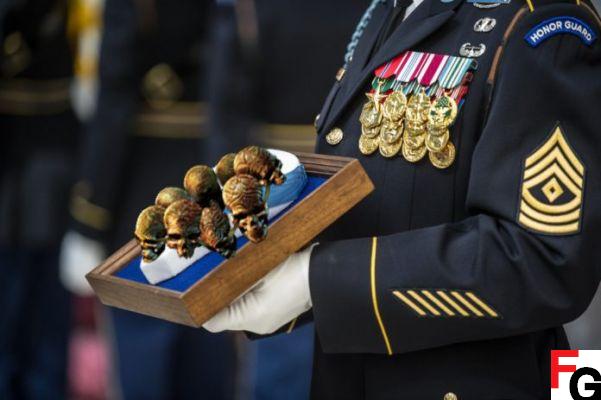 The iconic Headhunter will drop for more players

As players begin to familiarize themselves with specific builds and "meta" items in Path of Exile, they're bound to stumble upon one item that's been mentioned several times:

And, realistically, a bunch of flasks and Watcher's Eye. But you're not wearing them, so they don't count. Personally, I've never owned a headhunter because it's always too expensive. Also, I don't really play builds that use his unique mechanic very well. But I still want a really bad one. If anything, just to say I've had one before.

In Path of Exile's upcoming expansion, Ultimatum, Grinding Gear Games is adding Headhunter to the default drop pool, meaning he can drop at any time during play. So why is this belt so sought after? And how much could this update change its availability? 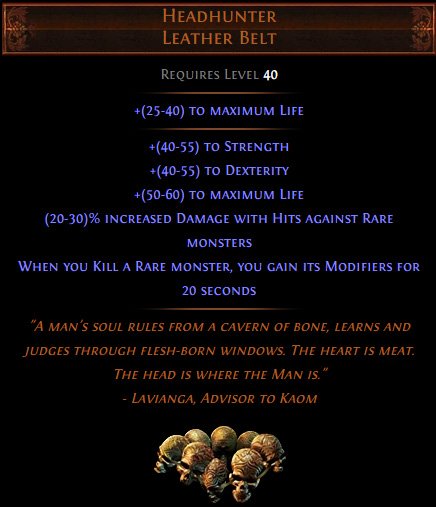 Why is Headhunter so good?

There's a reason nearly half of top-level builds have a Headhunter equipped at the end of the league. Headhunter has some nice stats (flat life, dexterity, and strength are great on so many builds), but it's really that last modifier that makes it a sought-after item for all: “ When you kill a rare monster, you gain its modifiers for 20 seconds.«

As most ARPG players can attest, rare mobs often carry multiple mods with them to make them harder. Things like increased resistances, speed, charges (frenzy, power, stamina), etc., can all be inherited by the player for 20 seconds. Keep in mind that in Path of Exile, 20 seconds is a long time. Lots of things only last a few seconds like flasks, Vaal skills, and modifiers with the “recently” descriptor. Headhunter mods start stacking up pretty quickly, especially considering the snowball effect of piling more and more mods onto a build that's already designed to roam a map.

Here's a great video from YouTuber SeanyC who does a great job of explaining (and showing) just how powerful Headhunter is:

Why is Headhunter so valuable?

It basically comes down to the basic economic principle of supply and demand. Headhunter was introduced very early in the life of Path of Exile during the "Nemesis" league. At the time, the league was for hardcore gamers only, so it didn't really attract a huge following other than "wow that looks crazy!" (Hardcore leagues are those in which, if characters die, they are removed from the league.) Needless to say, it continued to grow in popularity as more people got their hands on it. future leagues.

The only real way, until the Ultimatum league, to earn a Headhunter was to use a type of currency called Ancient Orbs. These are fairly rare (although less so in the recent Ritual League thanks to Harbinger Atlas Passives) and will turn a Unique into another Unique of the same type. The problem is that Ancient Orbs can only turn another belt into a Headhunter if two conditions are met: the belt must be the same item level (or higher), and the map the player is in must be tagged with the "Nemesis" mod. The only way to do this is to use the Map Device to add Nemesis Influence to a map.

So players will have Nemesis Influence on a map (using harvest, most likely), enter the map and continue to use Ancient Orbs on other unique belts and hope for the best. Here's a quick video example of someone being incredibly lucky, getting it in just six attempts. The odds are extremely low, and there are so, so many videos of people mindlessly applying Ancient Orbs to belts and accidentally "knocking over" a Headhunter. So here's a timestamped video of what's going on for fun.

There are other ways to acquire a Headhunter, like farming the Divination cards for him, but that's the traditional way. Between the sheer power of the unique mod and the incredible rarity, Headhunter is often worth more money than most players will see over many leagues, let alone a single league. Here is the price history for the current league, Ritual (listed in the Chaos Orb price):

What are the Headhunter changes in Ultimatum League?

While we don't know the specifics yet (and may never know outside of community experiences), Grinding Gear Games has just announced that a handful of powerful unique, including Headhunter, are added to the "base drop pool", meaning they can be dropped from any enemy at any time. Is the chance of dropping less than 0,5%? Probably! But it's still a huge increase in the incredible amount of portals that Path of Exile normally has around the famous belt.

Even though the drop chance is a tiny iota of half a quarter percent per enemy killed, there are still billions of monsters killed at an alarming rate in Path of Exile. As players enter the final portion of running maps, their builds become relentless killing machines, sometimes obliterating an entire map in two to three minutes.

This change is sure to increase the number of headhunters available on the market. Again, just using the basic economics of supply and demand, Headhunter's price should drop fairly steadily over the course of the league.

Is Headhunter nerfed to compensate?

Nope! Chris Wilson, lead developer at Grinding Gear Games, spoke to popular Path of Exile streamer ZiggyD about it, actually. His exact words were "Headhunter stays awesome" and that "we're not nerfing [Headhunter], it's gonna stay awesome." “However, it is now more difficult to obtain sources other than the main deposit pool. Chris explicitly mentions that it will take more Ancient Orbs to get one, as an example.

A Headhunter has become an iconic piece of gear in the Path of Exile community, and the nerf would upset a lot of people (not that Grinding Gear Games is a stranger to upsetting the community).

But what happens to the drop rate of Divination cards? As it stands, farming eight "The Doctor" cards is a very time-consuming process (unless you're one of the top ultra-players), and can include enough "Patient" cards to earn enough of "Nurse" cards to start earning "Doctor" cards. This hierarchy of cards is considered a deterministic, or reliable, way to get a Headhunter, and I imagine these drop rates are also nerfed as part of the "other sources" that Chris mentioned in the Q&A .

You can watch the conference in Twitch VOD here, timestamped on Headhunter.

What should I do if I get a headhunter?

Equip it! We probably will. Not all builds are instantly made amazing by equipping a Headhunter. Your build still needs survivability (which is usually provided by the belt slot) and the ability to get clear very quickly. Cyclone builds that Cast on Crit (CoC) are very popular with Headhunter because they never have to stop moving.

You can also try to sell the Headhunter, but again, there's no telling what the prices will look like now that it's in the main deposit pool. If the other sources of acquisition are nerfed, will this balance out and stay the same, super expensive price? Maybe nerfing more deterministic ways to get it will deter people from farming the divination cards and lead to even fewer headhunters in the market, driving up the price! Only time will tell!

Even though it's more common, I'll still long to see this multi-skull art in my stash... 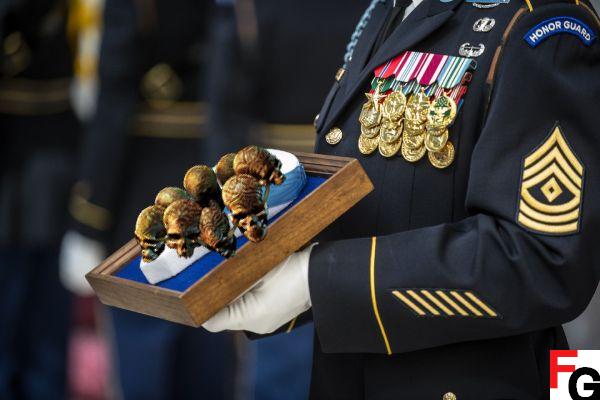