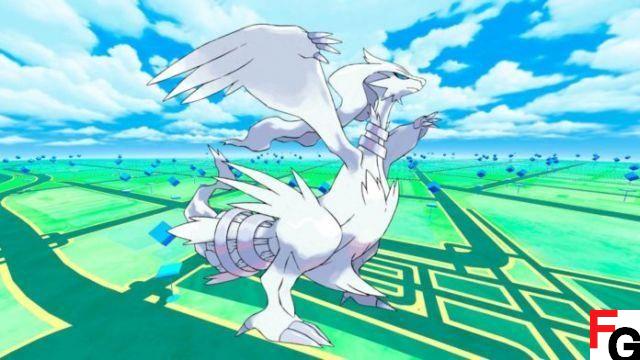 This month in Pokémon GO, Reshiram returns alongside other Unova Legendary Pokémon for a series of challenging 5-Star Raid Battles. This Fire/Dragon-type legendary can take up to five players to beat, so you'll need to team up and know the best counters to defeat it.

This will also be the first opportunity for players to get their hands on a Shiny Reshiram, which was previously unavailable in-game. Niantic has revealed that in a full party of 20 participating in a Raid Battle, at least one player will get a Shiny, so finding a large party for the Raid will only improve your chances.

With Reshiram's Fire/Dragon strike, the best option to counter is to use another Dragon or a Ground or Rock type to take on the Legendary Pokemon. Plus, with the sheer power of Reshiram, it's a good choice for bringing any Legendary Pokemon you have of these super effective offensive types to hit as hard as possible.

Rayquaza, Terrakion, and Groudon form the perfect trio to take on Reshiram. With their high offensive stats, good striking, and a powerful arsenal of moves, any of these three thrown into a team are sure to give you a helping hand. Flygon is a contender for best counter-reshiram thanks to its Dragon/Ground type dual, both hitting Reshiram for good damage. Unfortunately, Flygon will feel Dragon-type attacks as much as his opponent, so it's not all easy.

Can Reshiram be shiny in Pokémon GO?

As we mentioned before, Reshiram can finally appear as Shiny in the world of Pokémon GO. Along with other Legendary Generation Five Pokémon Zekrom and Kyurum, Shiny Reshiram was added to the game for 5-Star Raids this month.


While Reshiram and Zekrom Raid Battle will be available throughout the world of Pokémon GO for the entire month, they will be especially important during the special Raid Hours of 18:00 to 19:00 local time on 1, 8 and 15 december. Each of the Legendary Pokémon will be more widely available throughout this period, giving you the ability to prepare a party and go hunting for a Shiny Reshiram.

For more on Pokémon GO, check out our full schedule for the next Pokémon Spotlight Hour this month. Or, if you're still wondering how to get your Hoopa Unbound after Mischief Season ends, check out our guide to doing just that.

Pokémon GO is available now on Android and iOS.