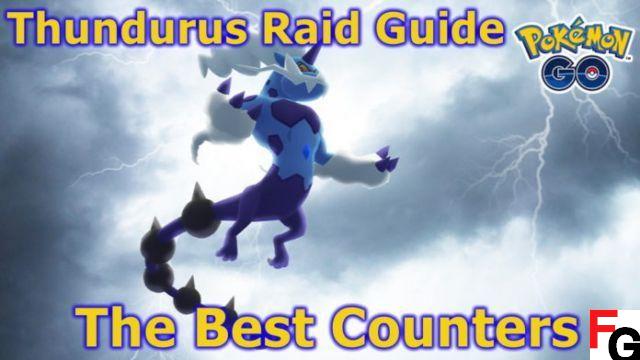 March hasn't been as exciting as February with Pokémon GO so far, although there has been a lot to do. Legendary Raids are still Pokemon we've seen before with Incarnate Forms for the Forces of Nature. That eventually changes, as we head into the Therian Formes debuting in the game, and we start with Therian Forme Thundurus. Accordingly, we have created this guide to the best counters in March 2022 for Therian Forme Thundurus.

Our full Therian Forme Thundurus is further down below, where we answer all the important questions about his raids and how to beat Therian Forme Thundurus. Before that, you need to have a solid counter team, so here is a list of the best. There aren't many Electric/Flying-type Pokémon out there, with the two Forms of Thundurus being two of the three in total.. Due to being a Flying-type, Therian Form Thundurus shares many of the same major weaknesses as Landorus and Tornadus, which are both Rock and Ice. But be sure to read the table below to find out the rare exceptions and special cases that appear, because so much was added to Pokémon GO before March 2022.

Although we've seen the Incarnate Form of Thundurus before in raids, this is the first time we've seen the Therian Form. Even so, it doesn't change the strategy too much when it comes to using Shadow or Mega Pokémon. Using a Shadow version of any of the Pokemon above will always be recommended over the regular version. The best Mega you use here is Mega Abomasnow, which can be incredibly useful with a set of Powder Snow and Weather Ball moves. Now let's move on to the complete Therian Forme Thundurus raid guide below.

Here are some of the frequently asked questions and important tips about Therian Forme Thundurus Raids in Pokémon GO for March 2022.

When do Therian Forme Thundurus Raids start and end in March 2022?

Therian Forme Thundurus will begin appearing in five-star raids in Pokémon GO on Tuesday, March 16 at 8 a.m. local time. You'll have the opportunity to catch this Pokémon in Raids for five days, as it leaves on Tuesday, March 30 at 10 a.m. local time. This differs from what we saw with Incarnate Formes, as Therian Forme Thundurus will be raiding for two weeks rather than five days like the others. It's likely because it's the start of Therian Formes, so Niantic wants people to have more time to catch them.

Therian Forme Thundurus follows the trend of other Forces of Nature raids in how they are fairly easy due to their weakness to ice and rock attacks. If you have two high level players, best friends and with the best counters, it is possible to beat Therian Forme Thundurus, but you will cut it terribly. As a result, we recommend having at least three or four players, especially if you don't have a higher level or don't have the best counters.

Therian Forme Thundurus is boosted by rainy and windy weather increasing its CP and making it harder to take down, although this means you will get higher CP at the end. Therian Forme Thundurus' electric moves will be especially strong in rainy weather, so you might be better off doing it outside of those if you're having trouble. Fighting in snow or cloudy conditions will give ice and rock attacks a boost, which can help.

Which CP for 100% IV for Therian Forme Thundurus

Without any time increase, Therian Forme Thundurus will have 2002 CP to 2091 CP. The higher CP means he's 100% perfect IV-wise, so you definitely want to grab him if you're lucky enough to find one. On sunny and windy days, this range drops from 2503 CP to 2614 CP instead, putting it at level 25 when captured.

Yes, it is possible to catch Therian Forme Shiny Thundurus in March 2022 in Pokémon GO. Of course, this is your first opportunity to get this shiny since this Pokemon has never been in the game before this point. The odds of catching one should be around one in twenty, although Niantic is very fond of changing that without making any announcements. The more you participate in raids, you will increase the chances of getting a shiny Therian Forme Thundurus, so keep trying until you are lucky enough to find one.

And that's our Therian Forme Thundurus Raid Guide for March 2022, with all the best Pokémon GO counters.