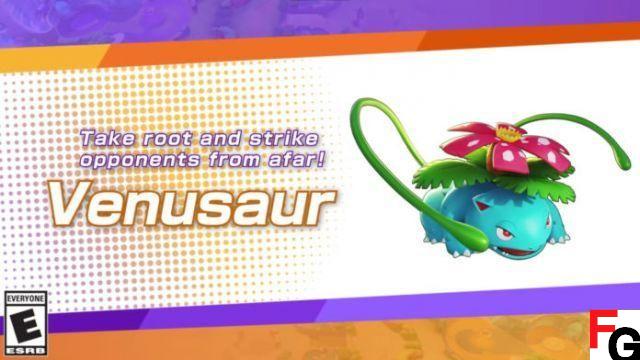 Venusaur is an interesting case in Pokémon UNITE. At first glance, it looks like something is missing from this oversized toad/plant-like creature. That's until you understand his tricks and how to properly handle them in a match and in teamfights. Classified as an attacker, Venusaur is said to deal a lot of damage, from a distance. It can do just that, but compared to Pikachu, another similar attacker, Venusaur feels much slower and not as "destructive" as the Yellow Mouse. That's true, to some extent, but that's only because Venusaur's power is elsewhere, as we explain below.

Best Setup and Build for Venusaur in Pokémon UNITE

Venusaur is not fast. Its moves are also slower, for the most part, making this Pokemon feel like an aggressive defender rather than an attacker. The reason for this is that Venusaur isn't a simple damage-dealing machine, but more of a trickier guy. Almost all of his moves are comprised of AoE, burst attacks, or abilities that persist for a period of time as a DoT (Damage Over Time) effect. He lacks mobility to a large degree, so instead of finding ways to reverse that, what you need to do is complement his slow playstyle in the best way possible.

Of all the attackers, Venusaur is the bulkiest of the bunch, making it a great choice for containing waves of enemies, easily controlling the flow of a lane, or teamfighting. In fact, his "laning" power is absurd, because with Gengar as a teammate, they can destroy an enemy lane without any effort. Considering both Pokemon are good at dealing DoT damage and their moves also hurt a lot, they're one of the best combos in the game. As an attacker, someone might assume you need to rush things fast , but Venusaur is all about taking your time and only hurting someone when possible. The best you can do to use his great arsenal is to support your team by holding lanes and letting scoring as a secondary task.