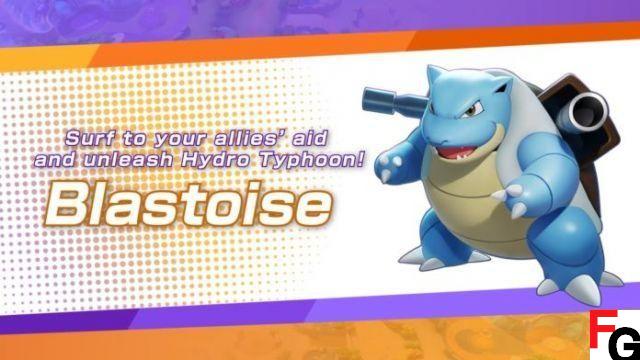 With Blastoise having finally arrived in Pokémon UNITE, many discuss the best possible build for the Pokemon. The inclusion is an early addition to the meta and completes the three starter evolutions from the original Pokemon games. We're here to walk you through the best way to use the big blue Mon in battle so you can take to the arena with confidence.

It's no real surprise that Blastoise ends up in the Defender category, so the former Squirtle Squad member will be able to tank hits with relative ease. However, that's not to say it doesn't pack a punch, and with the Torrent useful ability carried over from the mainline games, this Water-type receives a Special Attack boost at less than 50% health. These traits make Blastoise as annoying a wall as Snorlax, and his early community rankings make him one of the best defensive options in the game.

In terms of strategy, Blastoise is a good choice to support attackers due to its attack wall nature. Pair it up with someone's Pikachu or Cinderace, and you should at least be competitive on the upper flank. He's also instrumental in Team Assaults, so bring him into the fray for any Drednaw or Zapdos attacks, as his powerful Unite Move Hydro Typhoon will knock enemies back and provide a temporary shield.


We have plenty of other guides for the best Pokémon UNITE builds, so be sure to check them out.

Pokémon UNITE is available now on Nintendo Switch and will be released for mobile devices later this month.