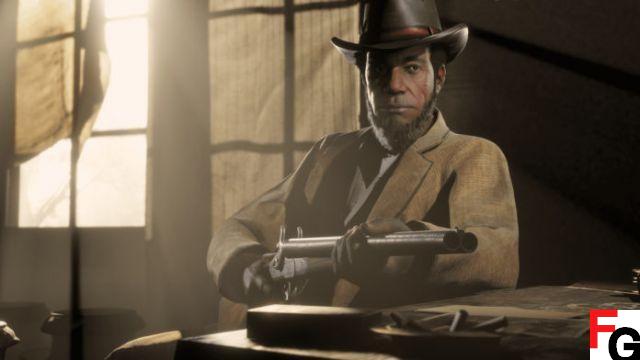 The Blood Money update is finally here in Red Dead Online, and here's how to start playing the new content. This update adds Crimes and Opportunities to the game, which players can complete to earn a special currency called Capital. Unlike previous updates, these missions do not require any initial investment to start, so you can save your gold bars to buy the new Quick Draw Club Pass or other things. Here's how to start Blood Money in Red Dead Online.

How to Start Blood Money in Red Dead Online

To start Blood Money, open your satchel and read the letter "M". Then, go to Saint-Denis to meet Guido Martelli. It will be marked on the map with a yellow dollar sign icon. Talking to him will unlock contacts across the border that will send you on new missions called Crimes. You can play them alone or with a group of friends, and they range from swashbuckling stagecoach heists to multi-stage heists. Completing them will reward you with a new currency called Capital.

However, crimes are only half of the Blood Money update. Once you find enough Capital for Guido Martelli, he will tell you about Blood Money's other new mission type: Looking for.... These revolve around the choking of a rising Senator Lemoyne who seeks to undermine the work of Guido's boss, Saint-Denis mobster Angelo Bronte. Each opportunity has several ways to achieve the goals, and you can discover new approaches by listening to conversations or exploring the environment. There will be three opportunities in total, but only one of them will be available when the update is released on July 13.

That's all you need to know about the new Blood Money missions in Red Dead Online. There are also other new features added in this update, but Crimes and Opportunities are the only new missions. The main loop in this update is to commit crimes to earn capital and then use the capital to uncover opportunities. Rinse, repeat and get paid. The capital can also be found outside of missions, so keep an eye out for unlocked properties and vulnerable camps that are ripe for theft.

Red Dead Online - How to Get Treasure Maps ❯