We gotta stand, we gotta fall

I played a lot of insane action games in my time.

No, not "whoa that backflip into a shotgun blast was wild!" " a little crazy. Like, "how was this done?" " foolish. Godfall doesn't quite fit under that latter umbrella as there's a clear vision here, but I can wholeheartedly say the number of people I can recommend it to is niche at best.

I also really enjoyed my time with him when he wasn't actively fighting me. 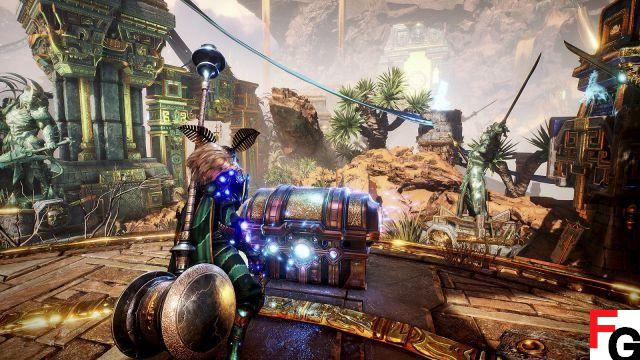 Godfall is an action-first game with a pretty silly set of story rules. In this universe, warriors wear "Valorplates", which are basically giant armors that all have different reasons to exist. You can become the bug you see above (in Godfall this was considered a lesser value plate until recently, according to the events of the game), the lion in all game promotional material, and so on .

Your job is to take down the traitor Macros, who intends to ascend into godhood: hence the game's title. will grant you their power. It's over the top and sometimes takes itself too seriously, and it's also glorious. It might take a certain type of person to really appreciate this aesthetic, but all the decadence of the 90s is appreciated for its boldness.

The actual gameplay is very linear, because again, it's action-oriented. You'll jump through stages with tons of optional objectives and loot, but you're mostly encouraged to fight your way to the end of the critical path, using spirit vision (detective) to guess where to go next. There's as little or as much content as you want, depending on your mood: especially once you've completed the endgame challenges. Almost all of this involves beating creatures or humans into a paste.


I think what I appreciate the most about Godfall is its combat nuances. It's fun right out of the gate, as hitting timed parries, balancing light and heavy attack combos, and throwing shields for fools then dashing in for a quick finisher is the first groundwork for what is to come. Over time, I started to really get into the nitty-gritty, buying new talents, acquiring new Valorplates, and trying out different weapons.

While I tend to get stuck in a rut when playing action games, Godfall reaches out to me when it comes to branching out. Techniques such as charging the power of an unequipped weapon are liberating, as they encourage experimentation and constant weapon swapping. You can tell the devs really honed in on combat here, leaving other Godfall elements by the wayside. This is a system that I spent time in the "lab" (the in-game training room) for.

Again, it's very important for you to understand that like many loot-based games before it, not everything was very well thought out. But as far as action goes, there was clearly a plan here. It can be a messy game that slots right into a number of historical launch titles. The UI is extremely clunky, often requiring players to manually exit an entire menu when equipping items, rather than returning you to the appropriate submenu. 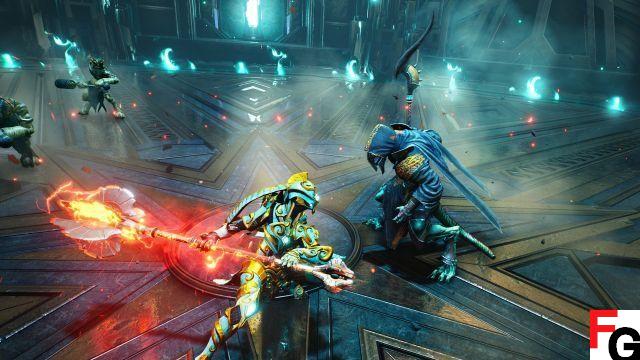 In a loot-based game, this can get really boring, a boring one that gets worse as you grab more gear and try to discern which ones are better with which Valorplates. What should be a fun effort in min-maxing becomes a chore. I also ran into some bugs, like the one that my HUD blanked out for a few minutes (there is an option to turn off the HUD manually, but in this case I couldn't see my targeting reticle), and a game crash .


I won't mention this as often when it slowly becomes the norm, but it's worth saying this is a $70 game. It's also still online, though it's fully playable single-player. I can't imagine a reason why this was implemented other than some kind of spaghetti code, a management/marketing decision made to get people to play with others, or as a back door to a possible DLC as “plan B.”

It's a shame it had to cost $70 on PS5 (it's $59,99 on PC) and has to be tied to an always-on system. Whoever made this decision doomed the reputation of this project, at least in the short term. Godfall is set to become one of the most controversial games to launch this generation: a relic for some, a whispered gem for others. Make sure that before you get it, all of your action-junkie boxes are checked.