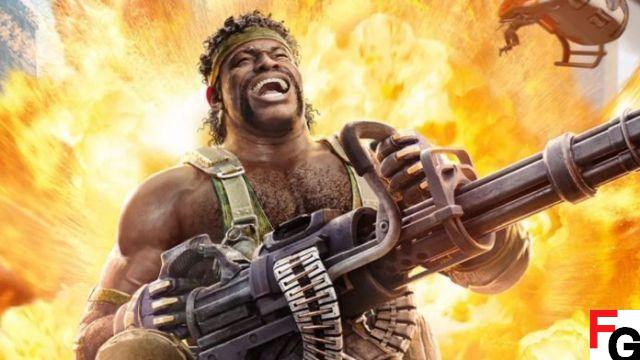 Rogue Company is in its third season and is steadily improving in many areas of the game. Perhaps the game's greatest strength is its ever-growing roster of Rogues to play from. Just recently, the very iconic Runway was released not too long ago. She's only just hit the meta, but it turns out we're getting another new character much faster than expected.

The new character coming to Rogue Company is a big "mountain of men" according to Nick "nice hair" Keogh. Yes, tell the memes that he looks like Carl Weathers character from Predator. That's what his theme is about: being the '80s action movie star who isn't a cover and who is all man.

As a teaser for its upcoming release, there are currently cosmetic packs in the store named "Cannon's Crew". These cosmetic packs are for Chaac and Dahlia. They are really beautiful and unique for characters that only have recolors for skins.

Snag the discounted packs while you can! They will eventually return to their original prices once they are no longer in rotation.

Finally, for the man of the hour himself, Cannon. Since he's a big man, he'll really be a defender character. Its design revolves heavily around tankiness and heavy fire. There will be an upcoming PTS update where PC players who play on Epic can try it out.


Cannon looks to be a very supportive Rogue when it comes to clearing rooms and holding the line. You can find out more about him by watching the latest Updates Show or by checking out the PTS notes.


There's no release date for Cannon yet, but usually after a PTS weekend ends, the new tested character comes out two to three weeks later.

Rogue Company is available now on all major current console platforms. There is also an upcoming mobile version of the game coming. Learn more about Rogue Company updates by clicking here.

Rust: how to get metal fragments ❯