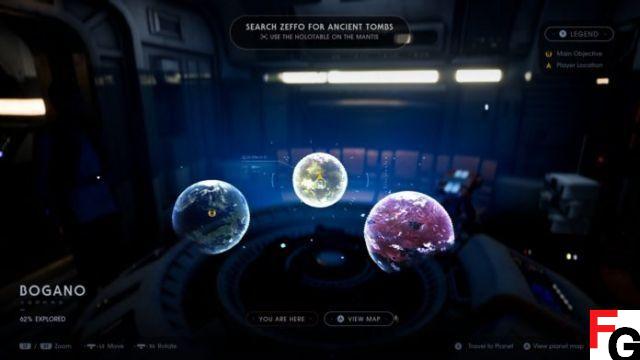 You Can't Have a Good Star Wars Game Without Exotics planets explore, and Star Wars Jedi: Fallen Order delivers on its promise. Some of you, however, have asked how many planets are there exactly? Warning, there will be spoilers below, so for those of you who like to experience what the game has to offer for yourself, I recommend checking back now. I don't know, maybe read our review or other guides, but if you don't mind being spoiled, keep going.

There are five planets in total to explore in Fallen Order.

Ok, I kept this blurry and used a screenshot from the start of the game for those of you who wanted a number, but not a list. If you only wanted that, it's time to look away, because here's the list of actual planets.

Excluding the first planet on which we find Cal (one cannot return to Bracca after leaving it), the planets available for exploration are:

There's a sixth planet for the final chapter, but it's a strictly linear affair that you won't be able to return to once the story is over. I excluded it from this list - not necessarily because of spoiler potential - but because it's similar to the running starter planet. The other five on this list all have secrets to find, cosmetics tucked away in hidden nooks, and plenty of paths to explore. Ergo: these planets are the planets that matter if you want to pass the entire game.

Plus, keeping a surprise in the game is never a bad thing, and The Last Planet is worth it. Again, feel free to check out our other guides, and to see what we thought of Fallen Order, be sure to read our review!