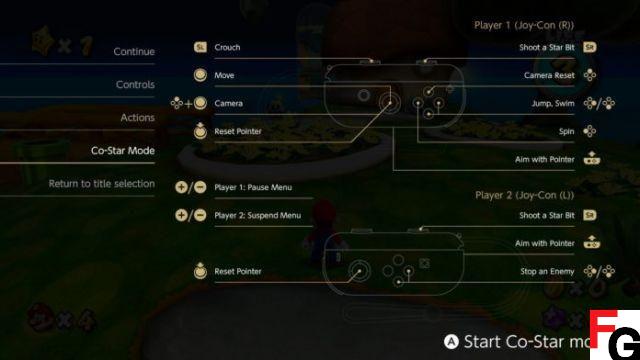 For the early years of the Super Mario series, it was a single-player experience. Sure, you could fire a second player to play each time you died, but playing together was rare or impossible. The release of Super Mario 3D All-Stars, which combines three classic adventures into one package, comes after the series offered plenty of ways to play together, including full co-op platforming. The three games here don't quite reach that level, with only one actually offering 2-player co-op support. Here's how to play 2-player co-op in Super Mario 3D All-Stars, specifically in Super Mario Galaxy.

How to play 2 player co-op in Super Mario Galaxy

That's right, if you're looking to add a second player for Super Mario 64 or Sunshine, you're unfortunately out of luck. These games never offered multiplayer support and it was not added for the 3D All-Stars version. However, Super Mario Galaxy launched with 2-player co-op and this was carried over for the Switch version. The setup takes a little more effort this time around, so here are the steps.

The feature is called Co-Star mode and allows two players to work together, with one controlling Mario and the other collecting stars along the way. All you have to do is press Minus and choose Co-Star mode from this menu, press A to activate the mode and you will be presented with the controller login screen. Here you can connect any two controllers, whether it's a set of Joy-Con, a single or a Pro controller. Once the two are connected, start playing again and you will be in 2-player co-op mode.

One player will control Mario while the other will have an on-screen cursor they can use to collect Star Bits or use them to attack enemies. It's not full co-op with both players controlling the on-screen characters, but it's coming next year with the release of Super Mario 3D World Deluxe, so you should expect that. But hope this helps to explain how to play 2 player co-op in Super Mario 3D All-Stars, especially in Super Mario Galaxy.