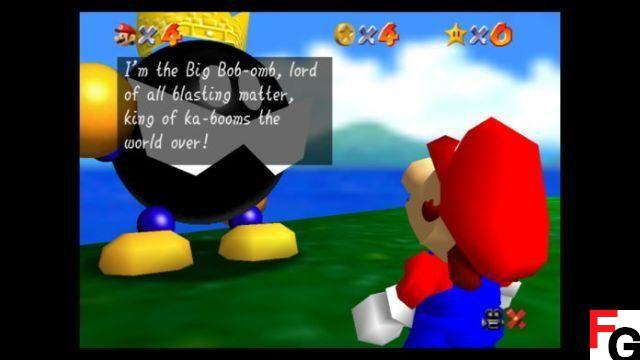 The Mario series isn't exactly known for its boss battles, yet that's exactly how Super Mario 64 introduces new players to its world. After entering Peach's Castle and jumping into your first painting, you'll be tasked with taking down Big Bob-Bomb, who is on top of the nearby mountain. Once you're there, the battle will begin, but you might find that all your usual tricks fail you. Jumping on him does nothing, even punching him in the face will only make you move. So what are you doing? Here's how to beat Big Bob-Bomb in Super Mario 64 on Super Mario 3D All-Stars.

How to beat Big Bob-Bomb

The answer is to do to him what he has been doing to you all this time. You have to pick it up and throw it on your back, which is the real secret here. Your main objective is to get behind Big Bob-Bomb and then hit him to pick him up. To do this, circle around him until you get there, or jump over him. I find crouching and jumping over his head works best, but try whatever works best for you to get behind him and then punch to pick him up.

Unlike what he does to you, which throws you off the side of the mountain, you want Big Bob-Bomb to hit the ground, so turn away from the edge and throw him so he lands nearby, taking damage . After three throws, without being ejected from the top of the mountain yourself, you will be victorious.

Here's how to beat Big Bob-Bomb in Super Mario 64 on Super Mario 3D All-Stars. It's important to understand this because it's also the format of all of Bowser's boss battles. Once you get this star, you won't have another big boss fight for a while.

Super Mario Sunshine - How to Get Yoshi ❯