The cast of 'Outlander': actors, actresses and characters 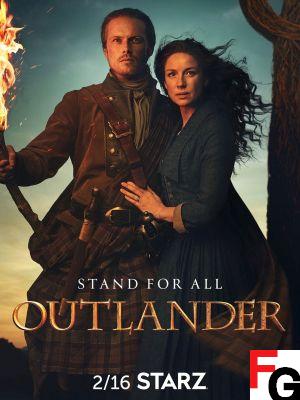 The cast of 'Outlander': actors, actresses and characters
/

To say that "Outlander" is a story of time travel - and lots of romance - set in 18th century Scotland is correct.

But that does no favors the countless historical contours and folkloric resonances of this saga based on the novels of Diana Gabaldon.Yes, of course there is time travel, through the stone circle of Craigh na Dun, but that is only one of the cogs that drives the story forward.

With a slight delay in the fifth-season premiere and a confirmed sixth, "Outlander" has managed to stay on the grid as one of fandom's most beloved series. And that's partly because of a wonderful cast, actors engaged from the first contact, in 2022, who gained emotional complexity and survived scenes of heartbreaking cruelty. Here's a summary so you know who's who inside and outside of this fiction. Here is the cast of “Outlander”.

Played by the splendid Caitriona Balfe, Irish model and actress, in the series she is Claire Beauchamp Randall Fraser, Claire aux amis, the beloved protagonist who journey as a well-to-do post-World War II nurse in rural Scotland in 1743, a world you've barely heard of through historical records and family histories. In the final season, he decides to stay in America with his beloved Jamie with the intention of starting a new life together.

Sam Heughan, originally from Scotland, has developed his career between theater and television, two spaces he has been cultivating since 2001. Between the third and fourth seasons, the filming of 'My ex is a spy' was authorized and he is currently working in the movie 'Bloodshot', alongside Vin Diesel. In 'Outlander', he's the brave man who wins Claire's heart and defends it from various kidnappings by English troops.

This 21-year-old Scottish actor became known for his role in 'The Hobbit' and for playing the young Ian, who during the fourth season makes the decision to stay in America with the two protagonists. His character, over time, matured into a more calm and cautious attitude.

British actress known for her role as Brianna Fraser, daughter of Claire and Jamie, although for years he believed his real father was Frank Randall, played by the magnificent Tobias Menzies ('The Terror', 'The Crown' and playing Edmure Tully in 'Game of Thrones'). Her servant, the humble Lizzie Wemyss, is played by the Scottish Caitlin O'Ryan.

Stubborn as a good Fraser, her future version discovers that her parents could die and will do everything possible to prevent them. Over the course of the series, she develops a romantic relationship with Roger.

British actor known for playing the role of Thomas Gillan in the mini-series "The Crimson Field", Sean McGary in "The Syndicate" and currently Roger in "Outlander". In this series, precisely, we have been able to see the complete arc of his character, from his childhood, embodied by Rory Burns, when he was a war orphan, until his last beating, where he is seriously injured , already in the fourth season.

You probably recognize this actor for his other great historical role in “Downton Abbey”. In 'Outlander' he is the famous pirate Stephen Bonnet, with his characteristic scar on his left cheek. Once again he will survive, as he survived the gallows.

And from survivor to survivor: although the role of Fergus was initially played by Romann Berrux, on the way to adulthood, it was also the country's César Domboy who took over. This actor has already been seen in 'Los Borgias', in a small role as Guy XVI de Laval.

Actress and singer, and married in real life to Kieran Kennedy, in his role in “Outlander”, she is the maternal aunt of Jamie, a real MacKenzie who has survived all her evil husbands. Her personal slave, Phaedra, is played by Nigerian Natalie Simpson.

English/Irish actor and entertainer. If you are used to video games, you will recognize his voice in roles like Bernard Laredo in 'The Witcher 2' or in minor roles in several 'Assassin's Creed'. In 'Outlander' he is an important figure in the Jacobite avant-garde, reverend and friend of Jocasta.

German actor known for his prestigious work in the film 'Son of Saul'. Here he can be seen in a closed plot of revenge and death, as a farmer who fears the witchcraft of Celtic witches like Claire and her entourage.

Jamie's godfather and right-hand man in 'Outlander,' who you'll automatically identify by his kilt, has been a recurring actor on shows like 'Game of Thrones' and 'Vikings', albeit with minor roles. In 'Outlander', in spite of us, he will end up taking Jamie's opposite view.

Jamie's eternal pursuer. This Canadian-Australian actor is best known for playing Jamie Bligh in 'A Place To Call Home'. In "Outlander", the commander of the English troops The one he plays will go from temporary rival to friend of Jamie and husband of Brianna.

You may have seen this English actress in the 'Victoria' series, although her work has made a name for itself on stage, representing Lydia in the play “Pride and Prejudice”.

In love with Jamie since the first time she saw him, she is the daughter of a MacKenzie tenant. At least in the old season. With Simon MacKimmie, they will have a daughter, Marsali, played by Lauren Lyle, one of the key figures in the new season.

When will 'Outlander' return?

Although its filming began in April, the series will not return until 2022 due to a hiatus imposed by Caitriona Balfe. 12 episodes which will take as reference the fifth volume, 'La Croix ardente', and which make us suspect a bitter end for the main couple. Regarding the political climate, we will see clashes between the North American colonies and the British Empire, which will not cease its military harassment.

add a comment of The cast of 'Outlander': actors, actresses and characters