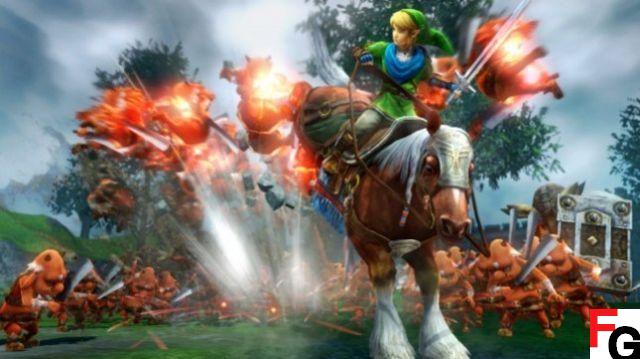 Eiji Aonuma took to the Miiverse this afternoon to announce the first details on the first DLC pack for Hyrule Warriors. Released on October 16, the pack is called “Hyrule Warriors Master Quest” and includes a new weapon, a new scenario to play, an adventure map and two additional costumes.

Giving some minor details about the pack, Aonuma announced that the weapon included in the pack will be none other than Epona herself, Link's trusty steed.

Aonuma had the following to say about Epona in Hyrule Warriors.

The new weapon added via the Master Quest Pack is… Epona! Some of you might be surprised to learn that Epona is a "weapon", but in Hyrule Warriors she can team up with Link to attack enemies! I already had the chance to try Epona in the game.

While riding Epona, I was able to blast through enemy noises and quickly gallop across fields, and had a lot of fun trying out this reimagined version of her in Hyrule Warriors. In the Zelda series, players never had the chance to tackle bosses by galloping around them with Epona like in Hyrule Warriors, so I hope fans will enjoy playing as Zelda characters in a game with a different kind of action than you usually find in the original series.

The Hyrule Warriors Master Quest Pack is the first of four downloadable content packs for Hyrule Warriors. A Twilight Princess, Majora's Mask, and Ganon bundle is slated for monthly release through February. Purchasing and pre-ordering all bundles at a discounted price (AU$20) gets you the Dark Link costume right now which can be used in battle right now!

Note that this is separate from the upcoming free DLC - which adds Cia, Volga, and Wizzro to the playable roster.

add a comment of The first Hyrule Warriors DLC weapon is……. Epona