Where to find Carnage and Venom Symbiotes in Fortnite 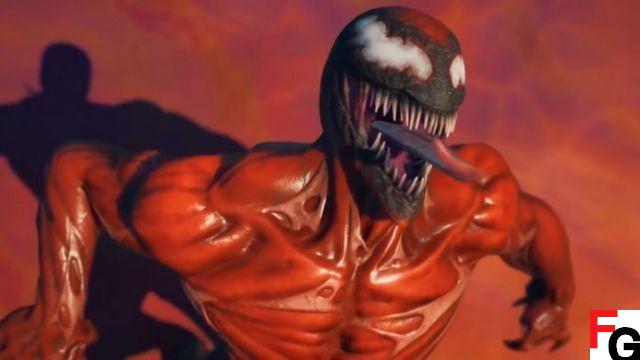 The Venom and Carnage Symbiotes have arrived in Fortnite as new Mythic Weapons, shaking up the Season 8 meta in exciting ways. Fortnite Chapter 8 Season 2 began last week after the culminating event of Operation Sky Fire, and now mysterious new areas called The Sideways have appeared on the island. Carnage is included in the Season 8 Battle Pass and Venom has been in the game for a while as an item shop skin, but players can now harness the powers of these Marvel villains in Battle Royale matches. Here's how to find and equip the Carnage and Venom symbiotes in Fortnite.

Both Symbiotes are Mythic Weapons, which are the rarest items in all of Fortnite. They have powerful passive abilities and devastating attacks when equipped. When you pick up one of the Symbiotes, you'll perform low-gravity jumps and can redeploy your glider at any time in the air.

When you have a Symbiote equipped, you can shoot it to deal 60 damage to an enemy and pull it towards you. This attack has a 10 second cooldown. If you also have a shotgun in your inventory, this can lead to easy elimination. The Carnage and Venom Symbiotes both have these abilities. The only difference between the two is their appearance.

Each Symbiote is contained in a canister that glows red or black depending on the character. Simply interact with the canister to equip the Symbiote and access new abilities. You can only hold one Symbiote at a time, but nothing prevents a team from having two people with each equipped.

Symbiotes are hot items right now, and since they're marked on the map, tons of players will be swarming their spawn locations at the start of each turn. Be careful when you fall into an area with one of them. Additionally, you can take a Symbiote from someone by killing them, just like with any other Mythic. It might be worth waiting for someone else to take it and letting the fights die down before you rush out to steal it.